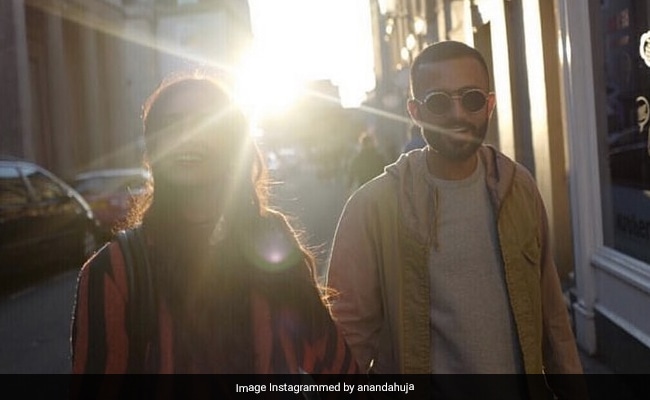 On Thursday, Anand Ahuja shared some unseen pictures of him with wife, actress Sonam Kapoor. Adding their signature hashtag “everyday phenomenal”, Anand wrote, “Since I didn't get to post this on our anniversary, sharing it now.” We can see sunkissed snaps of the couple while strolling on the streets abroad. Then, an elated Sonam wrote in the comment box, “Love you...love you...love you. Come to bed now.” Sonam and Anand celebrated their third wedding anniversary on 8 May 2021. Fans extended belated anniversary wishes for the couple in the comments section.

We often get to see their mushy interactions on social media. Not so long ago, Anand dropped a cheeky comment on Sonam's makeup routine video. “Obsessed with you,” he wrote. “Yes, entertained too. PS: Just realized this is what you were doing when I was making your breakfast. Hmm," was the addition.

Earlier, Anand shared magazine covers featuring Sonam. “Some people see just the photos; and another some of us see the daily motivation, determination, curiosity and will,” read the caption. He did not forget to put their hashtag “everyday phenomenal.”

Earlier this year, Anand went ahead and called Sonam his “crush.” The entrepreneur uploaded a gorgeous photo of his lady love who was busy gorging on Sushi. Sonam indeed looked like a true-blue style icon in a co-ord set, shrug and sunglasses. The romantic caption was, “TBT to a random pic I took of my crush, Sonam Kapoor.”

Sonam will next feature in Shome Makhija's Blind. She was last seen in the Netflix film AK vs AK, directed by Vikramaditya Motwane.