While Sonam Kapoor Was Busy With Make-Up Routine, Husband Anand Ahuja Was... 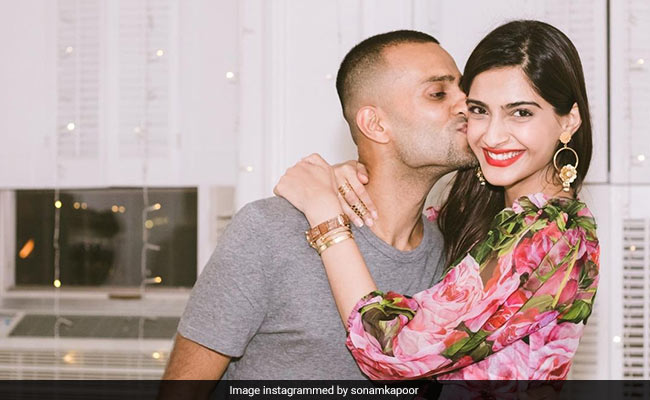 Sonam Kapoor's latest Instagram upload has husband Anand Ahuja "obsessed." The actress treated fans to an impromptu morning makeup routine. Clad in a black T-shirt, Sonam exhibits the products and demonstrates how to use them. “Getting ready for the day,” she captioned it. However, it is Anand's comments that have garnered everyone's attention. “Obsessed with you”, he wrote. But that's not it. He cheekily shared their secret saying, “Yes, entertained too. PS: Just realized this is what you were doing when I was making your breakfast. Hmm.” So, now we know that Anand wore the chef's hat for Sonam on a Monday morning. Isn't it romantic?

Previously, Sonam shared a happy picture with Anand and their friends. The couple twinned in black outfits. Sonam here can be seen sans makeup. The Aisha actress quoted British writer C S Lewis' words as, “Friendship is born at the moment when one man says to another 'What. You too?'” She added, “grateful for these clowns.”

Sonam and Anand never hesitate to profess love publicly. One of the recent posts has a frame-worthy picture of the two from a rainy day. The fashionista wrote a mushy caption, adding that she misses her home. “I miss India so so much, and I've been craving to go back home and see my family and friends desperately. But I realise I might be dissing my new home a little bit that has given me so much including my beautiful husband Anand Ahuja. A bad day in London is still better than a good day anywhere else,” read the post.

"You Taught Us What Love Is": Neha Dhupia And Angad Bedi's Adorable Birthday Posts For Daughter Mehr