Sonam Kapoor And Anand Ahuja. Just Like This, Forever 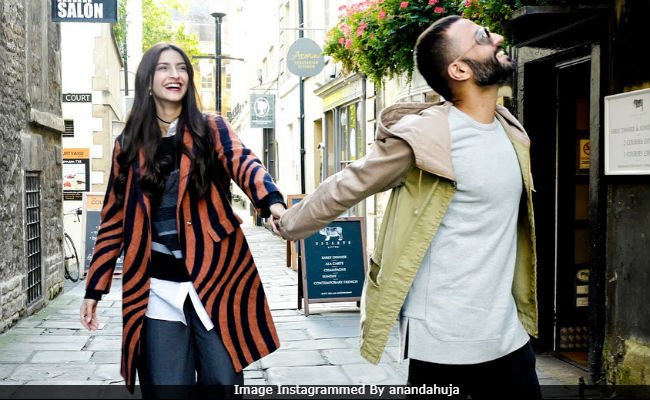 New Delhi: Sonam Kapoor's husband Anand Ahuja delighted us with some yet other adorable pictures of themselves and they are sending the Internet into a meltdown (sort of). "Cool... not cool," Anand captioned his post with the hashtag 'Everyday Phenomenal.' (This was their wedding hashtag too). Sonam, currently busy with Veere Di Wedding duties, was quick to respond to Anand's picture and commented, "I'm cool always," adding wink and heart emoticons. (Sonam and Anand, you guys are adorable). "You'll are too cute and equally cool" and "they are setting the goals too high" are some of the several comments posted on their pictures.

Take a look at Sonam and Anand's picture (Swipe right to see the other one).

A couple of days ago, Anand Ahuja explained why they had zeroed in on 'Everyday Phenomenal' as their wedding hashtag. "Everyday phenomenal reminds Sonam Kapoor of the importance of appreciation, positivity, and gratitude...that happiness is not something you get, it's something you are," read an excerpt from Anand's post.

The meaning & notion behind #everydayphenomenal is best described by this poem, one of my favorites, below: "Who has not found the heaven below Will fail of it above. God's residence is next to mine His furniture is love." #EmilyDickinson #MahatmaGandhi taught us that our words become our actions which in turn become our habits, our values and ultimately our destiny. #EverydayPhenomenal reminds @sonamkapoor of the importance of appreciation, positivity, and gratitude...that happiness is not something you get, it's something you are. #EverydayPhenomenal #fbf @faraz_khalid @noon

My dapper handsome husband for all our lifetimes #everdayphenomenal #flashbackfriday

Sonam Kapoor married businessman Anand Ahuja in Mumbai on May 8. After the wedding, the couple hosted a grand reception for their friends and colleagues. Later, the newly-weds flew to Delhi (Anand's hometown) for a brief stay and from there, Sonam went to attend the Cannes Film Festival.