Here's all you need to see from Sonam Kapoor's mehendi 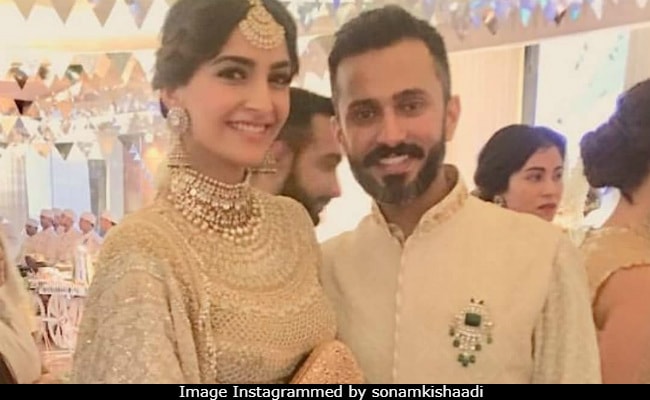 Sonam Kapoor and Anand Ahuja from their mehendi (courtesy sonamkishaadi)

New Delhi: After a rocking pre-mehendi party on Sunday night, Sonam Kapoor and Anand Ahuja are having the time of their lives at their mehendi ceremony in Mumbai. Photographs and videos from inside the party have been shared on social media both by fan clubs and those on the impressive guest list, which includes Janhvi and Khushi Kapoor, Jacqueline Fernandez, Masaba Gupta and others. Sonam's family - dad Anil Kapoor and brother Harshvardhan - were photographed at the entrance of the venue, welcoming guests. Keeping in parity with the dress code for the evening, the guests wore white and so did Sonam. She opted for a gold and white lehenga from the studious of Abu Jani and Sandeep Khosla while the groom-to-be complemented her in an embroidered kurta and bandhgala.

Here's all you need to see from Sonam Kapoor's mehendi:

Here are Sonam Kapoor's guests photographed outside the venue:

Promoted
Listen to the latest songs, only on JioSaavn.com
The Kapoors had a pre-mehendi party on Sunday evening, when Sonam got her bridal mehendi done. The intimate gathering at Anil Kapoor's residence in Juhu included almost all of Monday's guests and also had Rani Mukerji and Karan Johar. Here are a few glimpses from Sonam's pre-wedding party and what happened after.

Sonam Kapoor and Anand Ahuja will have a day wedding on Tuesday in accordance with Sikh rituals. The wedding celebrations will be wrapped with a blockbuster party on Tuesday evening, which is expected to have an impressive guest list. Sonam and Anand are reportedly considering October or November for their honeymoon as the actress has a very busy roster. Sonam will walk the red carpet at the Cannes Film Festival on May 14 and May 15, and she also has Veere Di Wedding releasing in June.