Masti shasti has already begun by the way, with Swara sharing snippets on Instagram 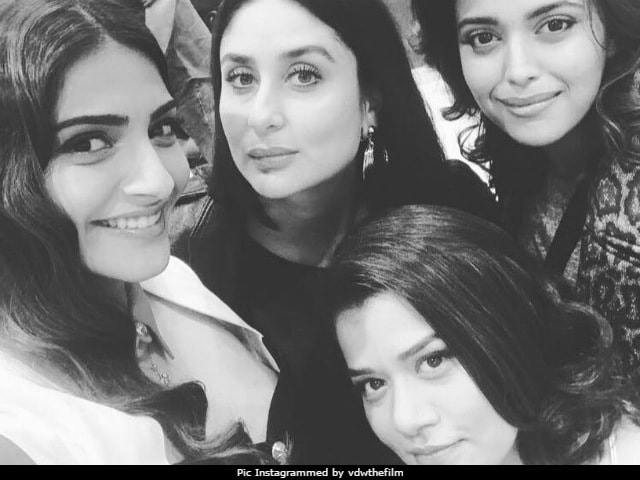 From the sets of Veere Di Wedding (courtesy vdwthefilm)

New Delhi: Veere Di Wedding is what movie buffs on the Internet have been obsessing over recently and there's Sonam Kapoor to the rescue. The actress co-stars with Kareena Kapoor in the movie and has just dropped a mandatory selfie with the other Kapoor from the sets on Instagram and followed it up with more, one each with Swara Bhaskar and Wake Up Sid actress Shikha Talsania - other actors who feature in the wedding drama. "First day shooting with this one," Sonam captioned the picture also featuring Kareena. Veere Di Wedding is Sonam's sister Rhea's production and marks the first film co-starring the two Kapoor stars. "Continuing the Kapoor-Talsania legacy," Sonam wrote for her pic with Shikha while for Swara, she said: "Three films and counting." Sonam and Swara have worked together in movies like 2013's Raanjhanaa and 2015's Prem Ratan Dhan Payo.

We'll start with the one with Kareena:

Promoted
Listen to the latest songs, only on JioSaavn.com
Well, just in case you thought this wasn't happening, you were wrong. "Who run the world" after all?

Kareena Kapoor made her debut on the sets of Veere Di Wedding over the weekend and all we can figure is the stars are going to have quite a lot of fun on sets. Masti shasti has already begun by the way, with Swara sharing snippets on Instagram. Between work, Sonam and Swara also caught up on memories from the past, sharing laughs over stories from the sets of their first film together. "What happened when Sonam and Swara met for the first time on the sets of Raanjhanaa?" You'll get to know below.

We're supposed to be learning our lines ! #VeereyDiWedding Tag your veerey!

New Delhi is where the stars are currently filming Veere Di Wedding, which is Kareena's first movie after she welcomed her first son Taimur in December last year. Directed by Shashanka Ghosh, Veere Di Wedding is expected to hit screens next year.