Sonakshi Sinha Left Her Heart In Maldives, As These Pics Show 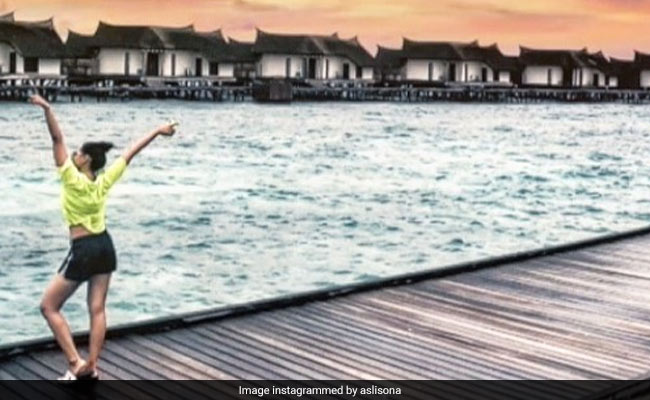 Bollywood actress Sonakshi Sinha can't stop dreaming about her days in Maldives and that clearly reflects in her latest Instagram entries. The 32-year-old actress shared pictures from her vacation on her Instagram profile. In one of the picture, Sonakshi Sinha can be seen posing in front of the beach. She can be seen dressed in a neon green t-shirt and a pair of shorts. "Saying goodbye to Maldives always breaks my heart a little... Until we meet again," she captioned the post, which received over 1 lakh likes on Instagram. Sonakshi has been actively sharing pictures form the vacation on her Instagram profile.

Take a look at the picture here, you can thanks us later.

Saying goodbye to Maldives always breaks my heart a little... this time a little more thanks to the amazing love and hospitality by @jumeirahvittaveli! Until we meet again #everythingcloser #jumeirahvittaveli

A few days ago, Sonakshi Sinha shared pictures from her vacation along with her floating breakfast and she captioned it: "My breakfast floats, what about yours?"

Over the weekend, Sonakshi Sinha shared a picture of herself and the caption on it read: "Should've been under the Maldivian sun, but we got some rain instead."

Should've been under the Maldivian sun, but we got some rain instead!! No problem because @jumeirahvittaveli makes the waiting inside worth it too!! Love being back in my favorite place in the whole wide world!!! #jumeirahvittaveli #everythingcloser

Sonakshi Sinha trended big time over the weekend after she made an appearance on the TV quiz show Kaun Banega Crorepati 11and failed to answer a Ramayana related question. Sonakshi was trolled by social media users after she failed to answer the question: "According to Ramayana, Hanuman fetched the Sanjeevani herb for whom?"