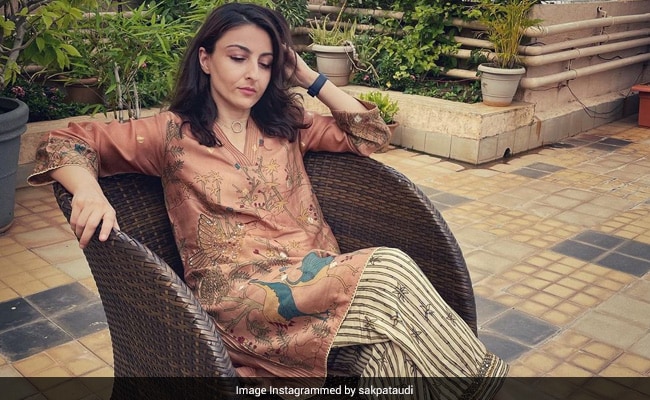 Actress Soha Ali Khan, on Tuesday, treated her fans to a bunch of new pictures of herself. The first two pictures feature Soha sitting on a chair in front of a table that had a cup of tea placed on it. In the other two pictures, we can see Soha posing near another table. From Soha's outfit to the colour of the furniture, the aesthetics of the pictures are all things brown. Soha can be seen dressed in a traditional Kurta which she paired with striped pants. She completed the look with a pair of juttis. Sharing the pictures on Instagram, Soha Ali Khan wrote: "Feeling quite 'brown' to earth." Soha's fans dropped heart emojis in the comments section of her post. "Aw pretty," a fan commented on her post.

Earlier in the day, Soha Ali Khan and her husband, actor Kunal Kemmu, received their COVID-19 vaccine shots. The 42-year-old actress shared a video on Instagram. In the video, Soha can be seen receiving the vaccine. "Got the jab! #covid_19 #vaccine How about you? Video credit and vaccine partner Kunal Kemmu," Soha wrote in the caption of the post.

Yesterday, Soha marked International Yoga Day with two pictures of herself and her daughter Inaaya. The mother-daughter duo can be seen meditating in the pictures. "Sometimes we all just need to find our centre #internationalyogaday," Soha wrote in the caption.