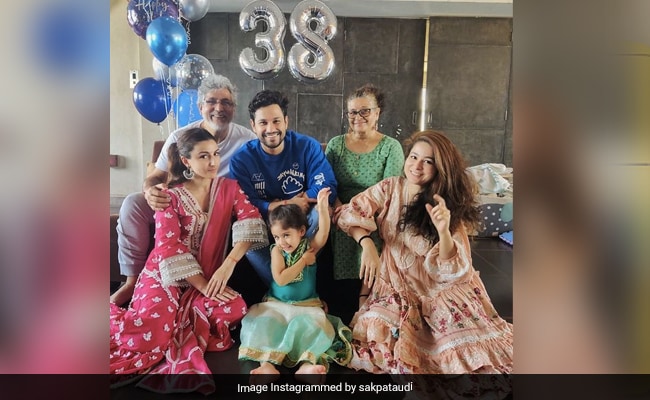 Kunal Kemmu is celebrating his 38th birthday with his loved ones - his family. The actor's wife and actress Soha Ali Khan shared a set of pictures from Kunal's low-key birthday festivities at their Mumbai home. The actor can be seen happily posing for the picture with his family by his side and his birthday cake in front of him. His daughter Inaaya stole the show in the pictures - she looks supremely cute. Sharing the pictures on social media, Soha wrote: "Posed, unposed, reposed and exposed! Birthday with Kunal Kemmu." The birthday boy too shared a solo shot of himself. No caption needed, he simply added an emoji.

Soha Ali Khan shared a special video, which had a compilation of Kunal Kemmu's pictures. She captioned the post: "Happy Birthday, Kunal Kemmu. Another year, another lockdown but I am grateful for all that you are and all that you have become. They say a Gemini has two sides but you are a polygon of provocation, a prism of perfection - whatever shape you are, you complete the jigsaw that is us."

Kunal's sister-in-law Kareena Kapoor posted a happy memory and promised to recreate the picture. She wrote: "Happy Birthday, brother in law... I promise we will recreate this picture soon... have a lovely one."

Soha's sister Saba Ali Khan posted a set of pictures, wishing her brother-in-law Kunal and she wrote: "Bro...! Kunal... Wishing you a great many moments. May life give you success and happiness in abundance."

In terms of work, last year, Kunal Kemmu featured in Malang, co-starring Anil Kapoor, Disha Patani and Aditya Roy Kapur. He also starred in Lootcase, which released on Disney+Hotstar. He also featured in the web-series Abhay 2.

Cheers To Ram Charan And Wife Upasana For "Keeping It Real". 9 Years And Counting