Once upon a time Smriti Irani's son came to the sets of Kyunki... Saas Bhi Kabhi Bahu Thi to pick her up New Delhi: It's throwback Thursday. Yay. Smriti Irani's husband Zubin Irani shared a picture of the actress politician and their son Zohr from the sets of Smriti's television show Kyunki... Saas Bhi Kabhi Bahu Thi. he Captioned it: "Mother and Son (with a kiss emoticon)" and Smriti reposted the picture and added: "My pride and joy." Smriti's Kyunki co-star also found the picture adorable and complimented Zohr saying, "He looks so regal." Smriti and Ronit's subsequent conversation re-opened the gates (yes, Tulsi-style) of a memory from the sets of Ekta Kapoor's show. Smriti recalled the day when Zohr came to the show's sets "to pick up his Ma." Ronit replied: "Yes, of course. How time flies. God bless." 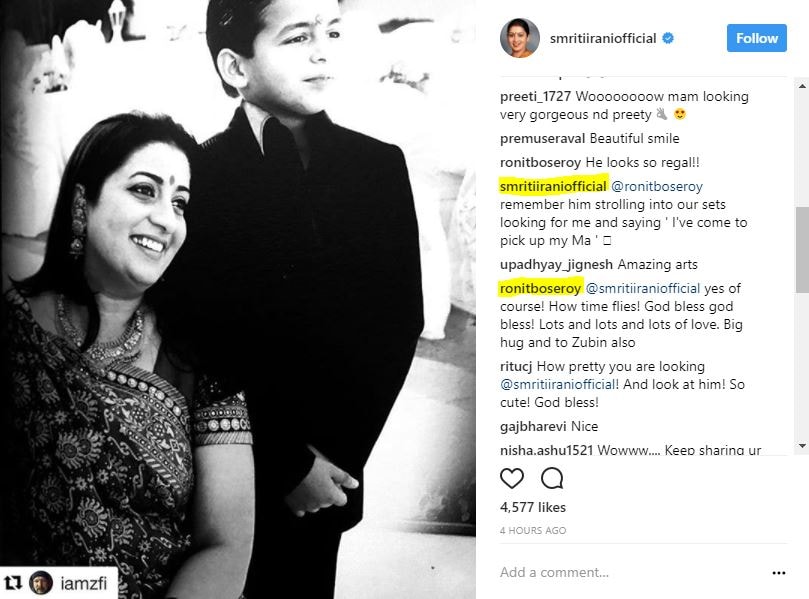 Smriti Irani started her television journey with Ekta Kapoor's Kyunki... Saas Bhi Kabhi Bahu Thi, which was aired from 2000 - 08. It was one of the longest running television soaps and it aired more than 1,000 episodes. She also featured in shows like Kya Hadsaa Kya Haqeeqat, Ramayan and Virrudh but none were as popular as Kyunki. Smriti has featured in small and supporting roles in regional films like Amrita and Jai Bolo Telangana.

Promoted
Listen to the latest songs, only on JioSaavn.com
In 2003, Smriti joined politics and is currently the Minister of Information and Broadcasting. She's earlier occupied the positions Human Resource Development Minister and Minister of Textiles. Smriti was also director Umesh Shukla's first choice for the role played by Supriya Pathak in All Is Well. But, Smriti Irani quit the film due to her political work commitments.

Smriti Irani married Zubin Irani in 2001 and they are parents to son Zohr, 16, and daughter Zoish, 14. Zubin Irani also has a daughter Shanelle from his first marriage to Mona Irani.