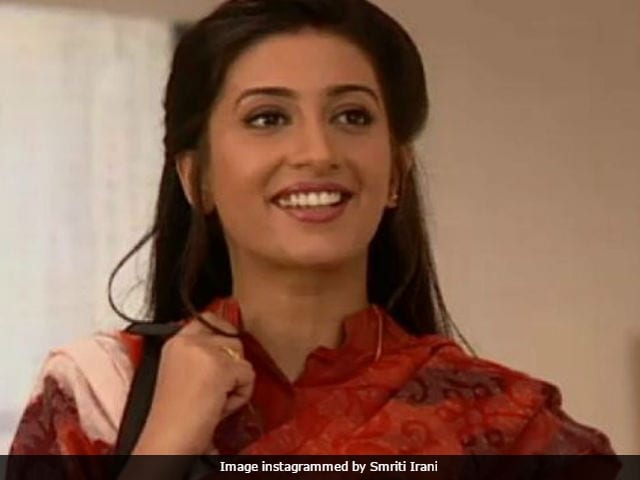 New Delhi: Politician and former actress Smriti Irani, who started her small screen journey with Ekta Kapoor's super successful television soap Kyunki... Saas Bhi Kabhi Bahu Thii, shared a throwback picture from the show on Tuesday. Smriti Irani, who played the female lead Tulsi Virani, shared a picture from an initial episode of the show, in which she's dressed in a simple suit with minimal make up - later, her character was to become synonymous with mile-long sindoor on her forehead, gaudy jewellery and kanjivaram saris. Ms Irani, 41, captioned the picture: "#17yearsofkyunki #it #began like this (sic)" Smriti Irani, who is the Union Textile Minister now, once told Ekta Kapoor that she would love to make an appearance on her show but "people will start talking. I am happy where I am," reported news agency IANS.

Kyunki... Saas Bhi Kabhi Bahu Thii, which was one of television's longest running shows, was the story of the idealistic Tulsi, who marries into a rich family. In over 1,800 episodes, Kyunki... Saas Bhi Kabhi Bahu Thi mapped Tulsi's story arc from her early struggle to be accepted into the family and to raise her children with high moral values. Her journey followed a twisty path.

Promoted
Listen to the latest songs, only on JioSaavn.com
Smriti Irani has also featured in several theatre projects and was about to make her film debut in Umesh Shukla's All Is Well. She opted out of the film because of her political commitments - at that time, Smriti Irani was the Minister of Human Resource Development.

Smriti Irani, a former model and beauty queen, is married to businessman Zubin Irani. She has a son named Zohr and a daughter named Zoish.