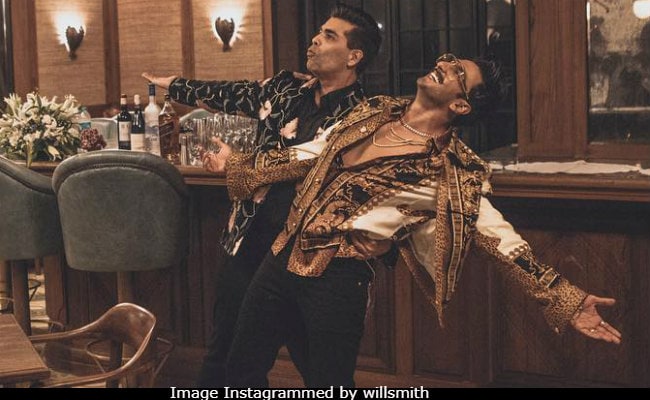 Another 'toodles' video from Karan Johar arrived on Wednesday but guess what? This time, Karan Johar got owned by none other than Ranveer Singh, who was accompanying Team Simmba to the sets of reality show India's Got Talent. The video features all three members of the core team of Simmba and begins with Sara Ali Khan, who battles KJo's fashion comments and how! Director Rohit Shetty appears to scare Karan Johar away while Ranveer brought his electric energy on the sets, a glimpse of which was in the video. Titled "The Simmba toodles integration!" the video began with Karan referring to Sara's colourful outfit and saying: "Didn't miss a colour, did you?"

The Simmba actress, who has a charming presence on social media, replied: "No I didn't, all of them!" Sara turned heads on the sets of India's Got Talent in a beaded bodice by Khosla Jani, the international label from the studios of Abu Jani and Sandeep Khosla.

Ranveer Singh opted for an animal-print jacket to go with his gangster look and accessorised with layers of gold statement neckpieces. Karan Johar, who is known for handing over his fashion picks to Ranveer himself, quickly spotted the actor's couture to be from Paris-Milan Winter-Fall collection 2018. "Love it," he said while Ranveer's reply was cent per cent hilarious: "It's only to impress you, Karan. I'm channelling my inner Bappi! I like to call this tiger Bappi - ferocious and fabulous. What about your pants? Are they space pants? They are making your a** look out of this world!" LOL.