When Karan questioned Kirron Kher if she knows what FOMO is, her response was epic 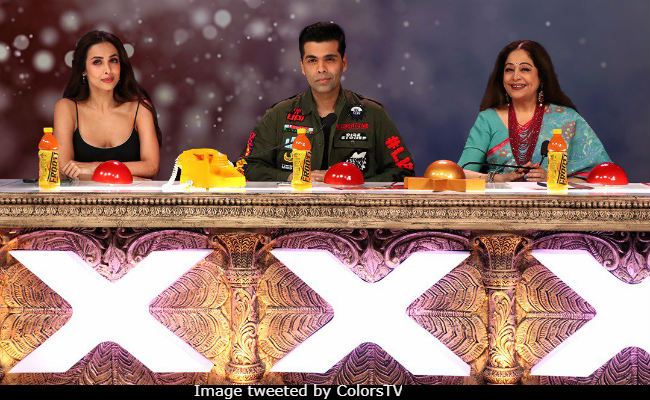 From the sets of India's Got Talent (courtesy ColorsTV)

Karan Johar has found his match when it comes to teasing his co-stars! It's none other than actress Kirron Kher, who co-judges India's Got Talent with the filmmaker. Ms Kher, in her usual feisty manner, jokingly schooled Karan Johar for his fashion sense and also his obsession with 'millennial lingo', as is described by Karan on Instagram. As is tradition, Karan Johar was filming yet another video on the sets of the reality show and as usual, he began by teasing Malaika Arora (who is the third judge on the panel) before eventually switched the frame to Kirron Kher. He asked her: "What's your OOTD?" A taken aback Ms Kher, who appears to be not as well versed in millennial abbreviations and Karan, enquired about what exactly 'OOTD' means.

"Get with the program, Kirron ji - it's Outfit Of The Day!" replied Karan, after which she pulled up Karan for being fashion obsessed: "Tu outfit his sochta rahega? Kuchh aur bhi socha kar!" But that's not it. When Karan further questioned Kirron Kher if she knows what FOMO is, this was her epic response. "Tum logo ko kya ho gaya hai! Kapde tum ulte seedhe pehente ho, language ka satyanash kar diya hai! What is FOMO? I only know it's okay to be homo but I don't know about FOMO!" Just in case, FOMO stands for 'Fear Of Missing Out.'

Check out the hilarious video here:

And if you think this is the first time Kirron Kher one-upped Karan Johar on the sets of the show, you got to see these too. Kirron Kher is clearly not impressed by Karan Johar's much envied collection of shoes and thinks he is a "fashion victim." In another video, Karan Johar claimed that Kirron Kher "attacked" him on the sets:

Karan Johar and Kirron Kher have worked together in films such as 2006's Kabhi Alvida Naa Kehna and 2008's Dostana. While Kirron Kher has been judging India's Got Talent since its inception in 2009, Karan Johar and Malaika Arora joined the judge's panel fourth season onward.