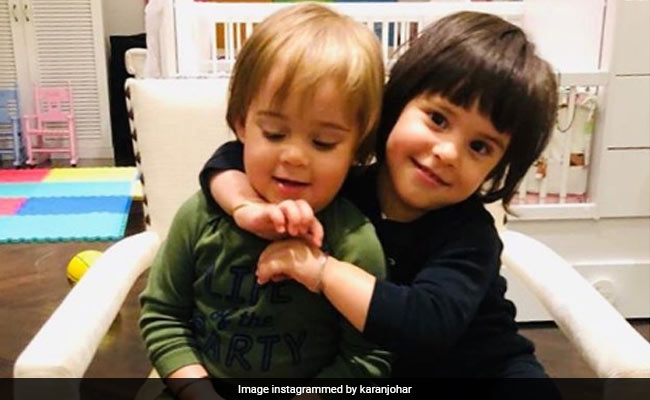 It appears that Karan Johar had fun Sunday with his twins Yash and Roohi and the photo shared by the filmmaker on Instagram is proof. Karan, who is often seen documenting his love for his twins on social media, shared a million dollar photo of his kids, which is sure to melt your heart. In the photo shared by the 46-year-old filmmaker, Roohi can be seen hugging her brother Yash and the photo is pure gold. The photo speaks so much about the "protective" nature of elder sisters and Roohi being elder than Yash by "one entire minute" (as revealed by Karan in the picture), this comes naturally to her. Karan described the adorable photo featuring his twins in the best possible way. "The protective sister! Older by an entire minute," the caption read. "Adorable," is the general sentiment on Instagram.

The protective sister! Older by an entire minute! #mylovestory #roohiandyash

Every time Karan shares a photo of his twins, the Internet has a meltdown of sorts. Remember the photo shared by Karan Johar, where he described his twins as "Kuch Kuch munchkins" alluding to his film Kuch Kuch Hota Hai, which celebrated 20 years recently? Or the photo in which Roohi can be seen planting a kiss on Yash's cheeks?

Yash and Roohi were born last year via surrogacy. Karan Johar, a single parent, last year told news agency IANS that he is not going to be "hysterical" and "hyper parent." "I am playing both mother and father in this dynamic, so I have a double role to play and for me, it's even more daunting. I have told myself that I am not going to be a hysterical, hyper parent because I see so many of them around me and specially leading actresses who become mothers," IANs quoted Karan Johar as saying.