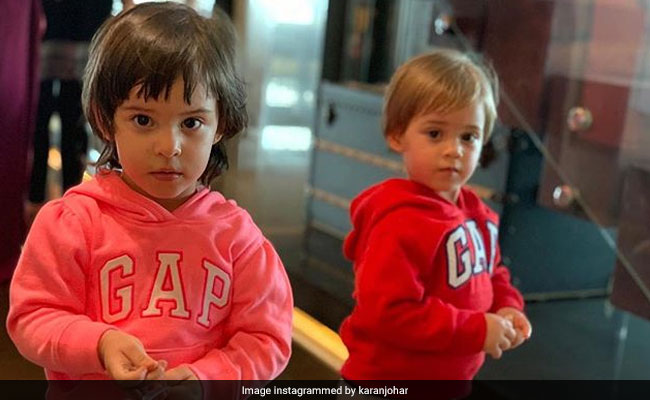 Filmmaker Karan Johar is often seen documenting his love for his twins Roohi and Yash on social media and his latest post on Instagram is no exception. On Wednesday, Karan shared a million dollar photo of his twins Roohi and Yash and cute can't even begin to describe the picture. Alluding to his film Kuch Kuch Hota Hai, which celebrated 20 years on Tuesday, the 46-year-old filmmaker captioned the photo: "My Kuch Kuch munchkins!" Karan Johar's photo garnered close to one lakh likes in an hour and is counting. The photo has been liked by Katrina Kaif and Arjun Kapoor. We chanced up on Arjun Kapoor and Manish Malhotra's comments on the photo shared by the filmmaker. "Baby gap legend," wrote Arjun Kapoor.

Every time Karan shares a photo of his twins, the Internet has a meltdown of sorts. Remember the photo shared by Karan where Roohi can be seen embracing her twin brother Yash and planting a kiss on his cheek? "Sibling love! Roohi Yash,"Karan captioned it.

Yash and Roohi were born last year via surrogacy. Karan Johar, a single parent, last year told news agency IANS that he is not going to be "hysterical" and "hyper parent." "I am playing both mother and father in this dynamic, so I have a double role to play and for me, it's even more daunting. I have told myself that I am not going to be a hysterical, hyper parent because I see so many of them around me and specially leading actresses who become mothers," IANS quoted Karan Johar as saying.

Kuch Kuch Hota Hai clocked 20 years on Tuesday and to celebrate the anniversary of the blockbuster film, a special event was organised by filmmaker Karan Johar. The event was attended by the film's lead trio Shah Rukh Khan, Kajol and Rani Mukerji, along with members of the Dharma family Kareena Kapoor, Janhvi Kapoor, Neha Dhupia, Manish Malhotra, Sidharth Malhotra. Kuch Kuch Hota Hai released on October 16, 1998 and was Karan Johar's debut film as a director. The film is considered to be the highest-grossing Bollywood film of 1998.