Thank you, Shweta Bachchan Nanda for this lovely picture 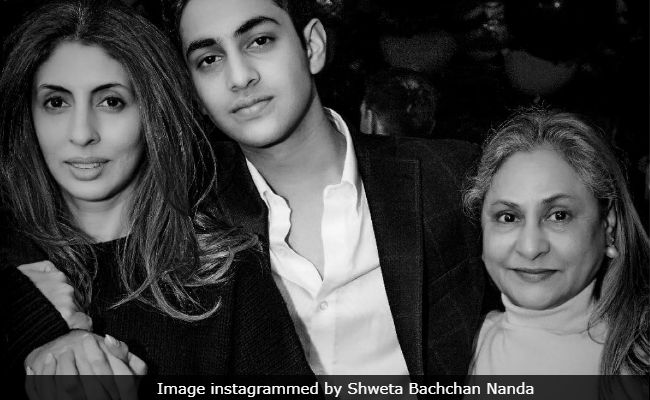 Shweta Bachchan Nanda posted an absolutely adorable picture in monochrome filter, in which she poses with her son Agastya and mother Jaya Bachchan. The picture has 'dearly beloved' written on it while the caption read: "What the picture says." It appears that Shweta has disabled comments on the post but it's quite evident from the rapidly increasing number of likes that the Internet loves it. Shweta is married to business man Nikhil Nanda and Agastya is the younger of their two children. Shweta's daughter Navya Naveli is two years elder to Agastya, who recently turned 18-years-old. Agastya is currently completing his studies in London.

*what the picture says*

Navya Naveli and Agastya often feature in headlines and speaking about her children's popularity, Shweta earlier told news agency IANS: "My children are no celebrities. Why smash them on the internet for one reason or the other? Let them earn their attention on their own. It shouldn't be just because they are related to somebody."

Shweta Bachchan Nanda recently became a published author after her first book, titled Paradise Towers, hit the bookshelves in October. She formally launched the book on the eve of her father Amitabh Bachchan's birthday. Apart from her novel, 2018 was a fruitful year for Shweta, who also launched a fashion label in collaboration with designer Monisha Jaising. Navya Naveli was the brand's co-model along with Shweta.

Meanwhile, Shweta Bachchan recently filmed an episode of Karan Johar's talk show Koffee With Karan 6 with her actor brother Abhishek Bachchan. Shweta Bachchan rarely interacts with the media and her appearance of the popular talk show is much-awaited.