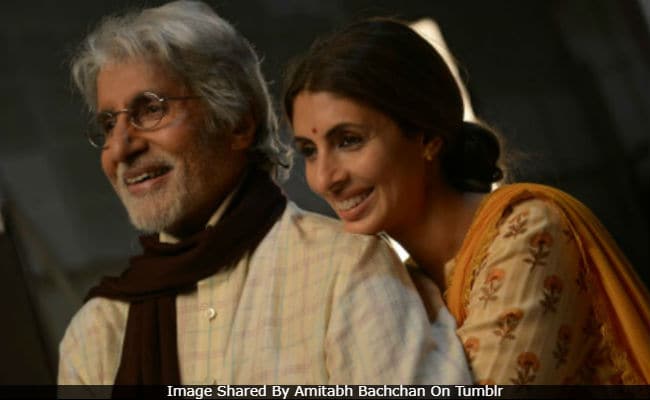 Remember Amitabh Bachchan and his daughter Shweta Bachchan Nanda had shot for a commercial in May? The video is finally out and it's heart-warming to see the father-daughter duo together on screen. The one-and-a-half-minute advertisement, which is for a jewellery brand, features Big B as an old man, who comes to return an extra amount of money he received as pension. He is accompanied by his daughter, played by Shweta. The advertisement, which marks the acting debut of Shweta, beautifully showcases the sweet bond a father and a daughter share. "Here it is our little labour of love," Shweta tweeted, tagging Amitabh Bachchan. The 75-year-old superstar later shared the ad and wrote, "Emotional moment for me. Tears welling up every time I see it. Daughters are the BEST."

T 2870 - Emotional moment for me .. tears welling up every time I see it .. daughters are the BEST !! pic.twitter.com/7Jes2GDPBo

Sharing the experience of working with Shweta, Amitabh Bachchan on his blog earlier wrote, "We endorse a jewellery brand, Kalyan and we work on a campaign together... she for the first time... a joy and honour a pride... Shweta my daughter my first born... loving and concerned and the most beautiful daughter in the whole wide world."

Once, Big B had also told news agency IANS that Shweta is the 'true actress' of the Bachchan family. "I know she won't admit it but she is very good. She does fantastic mimicry. Anywhere we go, some incident happens, she will mimic everybody exactly to the point. She is a good actress," he said.

However, she has no plans to pursuit a career in acting. Shweta Bachchan is married to businessman Nikhil Nanda and the couple are parents to children Navya Naveli and Agastya. "No. I don't plan on taking acting as a career... It's not a career. I enjoyed myself on the sets. It was great spending an entire day with my father," Shweta told IANS.

Besides acting, Shweta is also making her debut as an author. Her debut novel, titled Paradise Towers, will release in October.