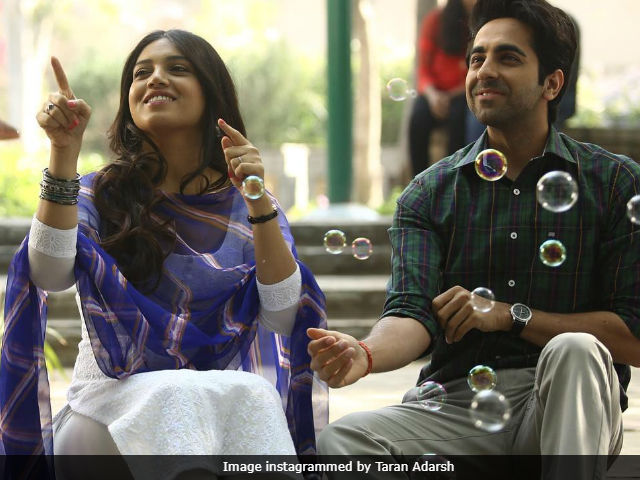 New Delhi: Ayushmann Khurrana and Bhumi Pednekar's Shubh Mangal Saavdhan, which released three weeks ago, has been declared a hit by trade analyst Taran Adarsh. The film's collection has dwindled and till Tuesday the film pocketed Rs 40.16 in India but the RS Prasanna-directed film is a winner at the box office. The Aanand L Rai production was reportedly made on a budget of Rs 25 crore, which explains why collecting rs 40 crore makes the film a commercial success. Shubh Mangal Saavdhan opened in theatres at the start of September to fabulous reviews and even better word-of-mouth, which boosted the film's business.

Promoted
Listen to the latest songs, only on JioSaavn.com
Shubh Mangal Saavdhan also borrowed from the reputation of Yash Raj Film's 2014 sleeper hit Dum Laga Ke Haisha, in which Ayushamann and Bhumi co-starred for the first time - it was also Bhumi's debut film. Fans of Dum Laga Ke Haisha were hoping for a fabulous performance from Ayushamann and Bhumi and apparently they were not disappointed. "Together they ensure that the dual glue of earthy humour and believable situations prevents the ticklish central concept from falling apart," film critic Saibal Chatterjee wrote in his review for NDTV. "Shubh Mangal Saavdhan breezy enough at its core not to be bogged down by the weight of its daring and untested pivotal plot point, is never less than entertaining," he added and gave the film 3-Star rating out of five.