Shibani Dandekar's Abs Are Burning Up Instagram And How 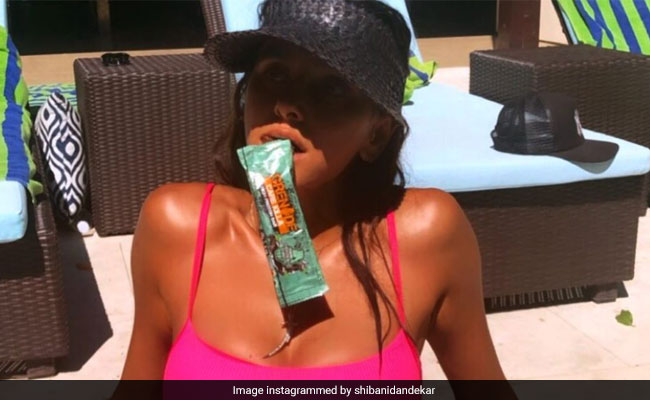 If we had to sum up Shibani Dandekar's latest Instagram entry in a word, we would sum it up as 'Wow' and seems like her Instafam had a similar school of thought (but more on that later). On Friday afternoon, the 39-year-old model-singer posted a sultry picture on her Instagram profile. In the photograph, Shibani can be seen soaking up the sun as she confidently poses in a bright pink bikini and can be seen wearing a black cap (because the sun). Shibani's Instafam couldn't stop gushing over the picture and wrote comments like "gorgeous" and "so stunning." Shibani, who can be seen eating a protein bar, stated that her post wasn't an advertisement. An excerpt from her post read, "This is not an ad! But since you asked, Grenade bars are the bomb. The best thing ever."

This is not an ad! But since you asked Grenade bars are the bomb .. Legit the best thing ever .. Every. Damn. Flavour @grenadeofficial Eat one or maybe ten .. it'll change your life! you are welcome ... thanks @drewnealpt for introducing me to them and letting me eat them xx

Shibani Dandekar frequently features in the headlines for her relationship with actor-director Farhan Akhtar. The couple, who reportedly started dating last year, frequently make appearances on each other's Instagram profiles and we simply love it when that happens. Meanwhile, Farhan Akhtar posted a video of Shibani walking the ramp for Payal Singhal's show at the Lakme Fashion Week and he captioned it: "You're the one that I want."

Farhan and Shibani walked the ramp together at the Lakme Fashion Week last month. Take a look at the pictures here: