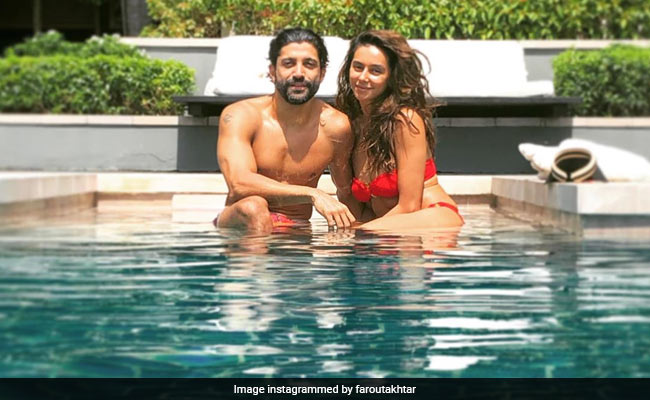 Farhan Akhtar's latest Instagram post is a reminder of why we just can't seem to get enough of his and Shibani Dandekar's social media PDA. Farhan, who is said to be dating the TV presenter, posted a picture of himself along with Shibani, in which they can be seen chilling in a swimming pool. Shibani looks absolutely stunning in a red bikini in the photograph. Going by Farhan's caption, the picture was taken in Ko Samui, Thailand . The Rock On! actor captioned the post: "At, by and on your side." He added the hashtags #poolheads, #kosamui and #FarOutdoors to the post.

Meanwhile, Shibani Dandekar posted a solo photograph on her Instagram profile, in which she could be seen soaking up the sun. She captioned the post: "Island vibes. That brown girl getting browner." Check out the picture here:

Farhan and Shibani reportedly started dating last year. However, they have neither confirmed nor denied the reports of their current relationship status. They are frequently seen making appearances on each other's Instagram profiles and are also spotted together at public events.

On the work front, Farhan Akhar produced his filmmaker sister Zoya Akhtars' film Gully Boy, which featured Ranveer Singh and Alia Bhatt. He will next be seen in Shonali Bose's The Sky Is Pink, co-starring Priyanka Chopra and Zaira Wasim.

Farhan Akhtar was earlier married to hairstylist Adhuna Bhabani, with whom he has two daughters - Shakya and Akira.