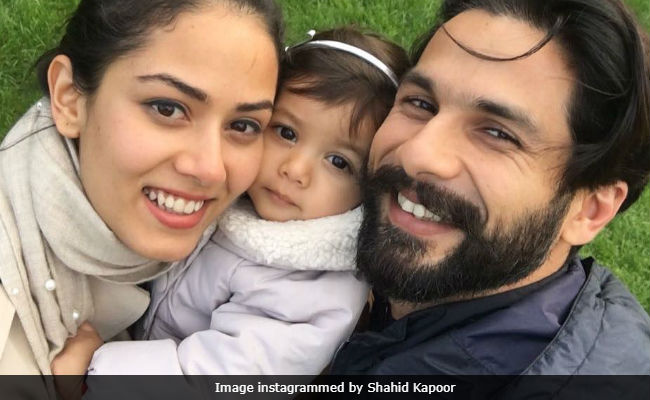 New Delhi: It's been a happy week for Shahid Kapoor, who won the first award for "Padmaavat," told the world about his wife Mira Rajput's second pregnancy and saw his brother Ishaan Kahtter's debut film - Beyond The Clouds. Though reports of Mira's second pregnancy were circulating on social media like wild fire, the couple took their sweet time to confirm. On Friday, Shahid and Mira shared this happy news with fans by posting an adorable photo of their one-year-old daughter Misha on social media. "I am very happy and we just felt like sharing it with everyone. Mira wanted to put it out on Instagram and I thought that the photograph was really cute, it was a spontaneous decision and it just happened. It was a great weekend for the family," Shahid told news agency IANS.

On Saturday, Shahid Kapoor won the Best Actor trophy at the Dadasaheb Phalke Excellence Awards, and the "Padmaavat" actor dedicated it to his wife Mira. He told IANS: "This is my first award for Padmaavat this year, so I am really very happy and I would like to dedicate this award to my wife, Mira because she tolerated me for a year during this period and without her I wouldn't have been able to do this film. So I am very thankful to her."

Of Beyond The Clouds, which marks his brother's debut, Shahid said: "Ishaan has given a spectacular performance. He is getting a lot of love. He is very deserving of all the applause and appreciation; he is a very talented boy," he said.

"Of course he just started but he has lots to learn and a long way to go. He has to put his head down, with humility and work hard. He is getting good opportunities to work with people like Majid Majidi and now Shashank Khaitan (in Dhadak), I think he should consider himself fortunate," Shahid added.

Promoted
Listen to the latest songs, only on JioSaavn.com
Shahid Kapoor is currently making Batti Gul Meter Chaalu, which also stars Shraddha Kapoor and Yami Gautam. The film is directed by Shree Narayan Singh (Toliet: Ek Prem Katha and Yeh Jo Mohabbat Hai) and the filming will be over May.