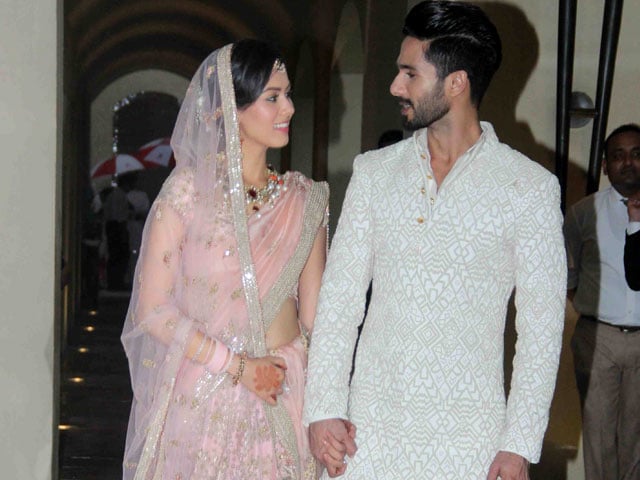 The 'just married' couple made a brief hand-in-hand appearance to please the shutterbugs.

New Delhi: Bollywood heartthrob Shahid Kapoor married 21-year-old Delhi girl Mira Rajput at a Chattarpur farm, in New Delhi on July 7. While the marriage itself was an intimate affair, away from the glare of the media, Shahid dressed in a Kunal Rawal sherwani and Mira in Anamika Khanna couture made a brief hand-in-hand appearance to please the shutterbugs, looking absolutely moonstruck, at a hotel in Gurgaon.

While they gear up for an after-party to be held later today evening, Bollywood celebs on microblogging site Twitter wished the couple "a world of happiness."

This is what Shahid's Vivah co-star Amrita Rao posted on Twitter:

Congrattts @shahidkapoor on the Asli VIVAH Besties to U & the Mrs for a blissful married life!!

@shahidkapoor congratulations Shahid and Mira.. Beautiful beginning to a beautiful life together

This is what Genelia's husband Riteish Deshmukh tweeted:

Jewellery Designer Farah Khan Ali who was all praises for the newly turned Mrs Kapoor, went on to bless the couple with lots of "health, wealth, happiness and love":

Congratulations @shahidkapoor and Mira Rajput. May God shower all his blessings on you. Lots of health wealth happiness & love

Actress-VJ Sophie Choudry too posted for the 'gorgeous couple':

Congratulations Mira & @shahidkapoor! U make a gorgeous couple! Wish u a beautiful life together! #happilyeverafter

Meanwhile, Shahid, who found it difficult to contain his happiness, posted a 'hitched' selfie on Instagram.

Also pictures from Mira and Shahid's sangeet, which was held on July 6, have been doing the rounds on social media.

After wedding celebrations in Delhi, Mr and Mrs Kapoor will host a reception in Mumbai, on June 12.