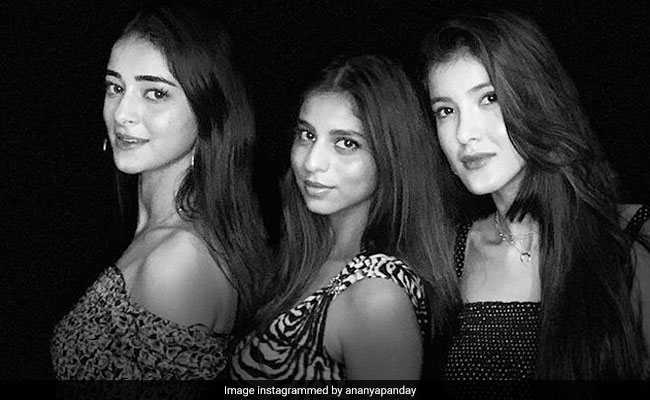 Sharing the black-and-white picture, Ananya Panday wrote: "Charlie's Angels," and accompanied it with a heart emoji and hashtag #familyportrait.

Ananya, Suhana and Shanaya are gen-next Bollywood BFFs. Ananya Panday made her debut in Bollywood with Karan Johar's Student Of The Year 2, while Shanaya started her film industry career as an assistant director. Suhana, on the other hand, has just completed her acting course in the United States.

Excited much to see the 'Charlie's Angels'' family portrait? Check it out:

This is not the first time Ananya has referred to her group as Charlie's Angels. Earlier, on Suhana Khan's birthday, she dug out a photo from the plethora of her memories and shared an adorable throwback picture featuring the trio posing like 'Charlie's Angels.'

Meanwhile, take a look at Ananya's other Charlie's Angels' post:

On the work front, Ananya is preparing for her second film Pati Patni Aur Woh, which also stars Kartik Aaryan and Bhumi Pednekar in pivotal roles.