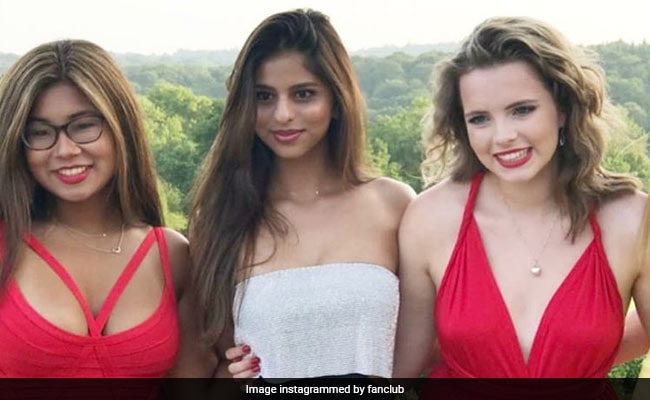 It's party time for Shah Rukh Khan and Gauri's daughter Suhana Khan, who graduated from her Ardingly College in London on Friday. But that is not the only reason why she is trending on the Internet, pictures from her graduation party have surfaced on social media and Suhana is looking drop-dead gorgeous in those party clicks. On Saturday, a fanpage dedicated to Suhana shared a picture, which also features her friends from Ardingly College and she is looking chic in a white tube top and black pencil skirt. Her friends can be seen dressed in coordinated outfits. Another picture from the graduation celebrations was shared by Suhana's friend Athena Browning (standing right in the main picture), which were reposted by fan clubs dedicated to Suhana but more on that later. Take a look:

Another fan club dedicated to Suhana shared a seperate picture from the celebrations, which features the 19-year-old star kid's Ardingly squad. Check it out:

Suhana Khan's graduation ceremony took place on Friday and it was attended by Shah Rukh Khan and Gauri Khan. The proud parents shared several pictures and video from the ceremony on their respective social media profiles. Sure it was an emotional moment for Shah Rukh, who even wrote a heartfelt note for her daughter. Sharing a selfie, which also featured Suhana and Gauri, SRK wrote: "Four years have flown by. Graduating from Ardingly. Last pizza... Last train ride... And first step into the real world... School ends... Learning doesn't." Here's the post we are talking about:

Also, take a look at Shah Rukh Khan's other post from the occasion:

Last day at school. To adding new experiences and colours to your life ahead....

Gauri Khan also shared a video from the ceremony, in which Suhana could be seen receiving "The Russell Cup for Exceptional Contribution to Drama." Here it is:

The Russel cup for exceptional contribution to drama.

In a separate post, Gauri shared a mesmerising picture of Suhana Khan from their lunch at Ardingly.