Seen This Fab Pic Of Suhana Khan With Friends Yet? 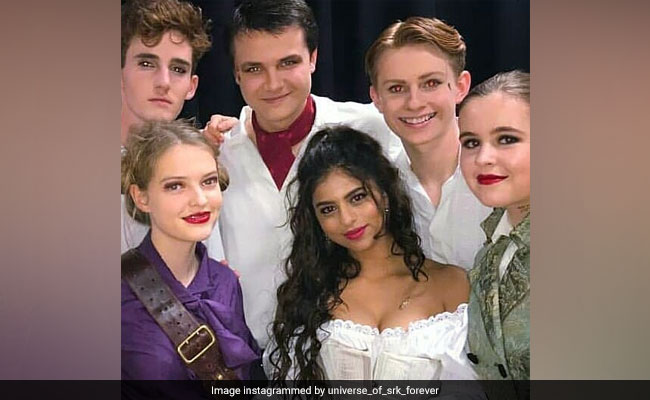 Suhana Khan hasn't made her debut in Bollywood as of now but it wouldn't be wrong to say that she is already a bona fide celebrity. Pictures of Suhana go insanely viral on the Internet and the latest photograph along with her friends, is not an exception. On Friday morning, we came across a picture of Suhana along with a couple of her friends and it going crazy viral on social media. The picture has been curated by several fans clubs dedicated to Suhana on Instagram (there are so many). Dressed in a white boat neck top, Suhana looks simply exquisite as she happily smiles for the camera. The picture appears to be from one of her plays as her friends can be seen sporting dramatic make-up in the picture.

There's no denying the fact that Suhana has some impeccable genes. She has definitely inherited her designer mom Gauri Khan's fashion sensibilities and a love for acting like her father Shah Rukh Khan. Suhana, who is currently studying in London, aspires to be an actor just like father.

We learnt about Suhana's love for acting courtesy Shah Rukh Khan. In one of his Instagram entries, SRK shared a picture of himself and Suhana juxtaposed with a poster from a play, in which she played the role of Juliet in a rendition of William Shakespeare's iconic play Romeo and Juliet. SRK shared a special note for his daughter, an excerpt from which read: "With my Juliet in London. What a wonderful experience and exceptional performances by the whole cast. Congratulations to the whole team." Take a look at the post here:

Besides Suhana Khan, Shah Rukh Khan and Gauri are parents to 21-year-old Aryan, who studies in California. The star couple are also parents to 5-year-old AbRam, who attends school in Mumbai.