Shah Rukh Khan May Have A Cameo In Vijay's Bigil: Reports

Shah Rukh Khan was apparently approached by the team of Bigil 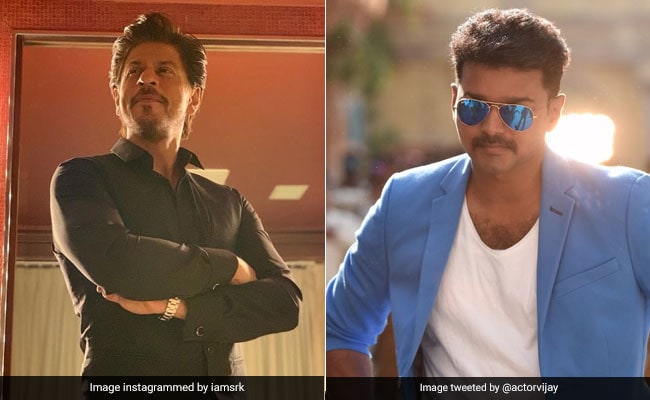 Shah Rukh Khan was apparently approached for a special appearance in Tamil actor Vijay's upcoming film Bigil, as reported by Bollywood Hungama. A source close to the film said: "They approached Shah Rukh Khan with the request. Shah Rukh has never done any Tamil film before. But, this is just to shake a leg with Vijay to an AR Rahman's tune," reports Bollywood Hungama. Vijay treated his fans with the first look of the film by sharing it on Twitter on his 45th birthday. If Shah Rukh Khan makes a special appearance in Bigil, then it will mark his first Tamil film.

The poster features Vijay in two different looks, which hints that the actor will play a double role in the film. One of his characters will apparently be portrayed as a football coach. One of his looks shows him dressed in a sports jersey whereas in the other look, he can be seen wearing a lungi and a shirt and he appears to look older than the other character. The film was earlier titled as Thalapathy 63. The film is being produced under the banner of AGS Cinema and is being directed by Atlee Kumar. The film will also feature Nayanthara, Vivek, Kathir, Yogi Babu and Robo Shankar. Bigil will release this year on October 26.

Check out the first look of the film:

Vijay is well-known for his roles in films such as Poove Unakkaga, which released in the year 1996, Thulladha Manamum Thullum and Thamizhan.