Bigil was earlier titled as Thalapathy 63 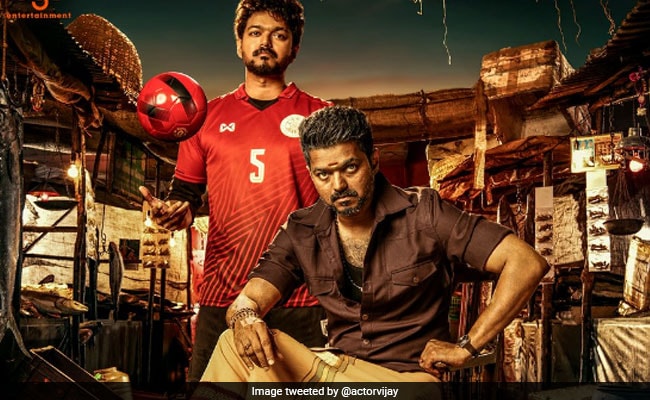 Tamil star Vijay found a spot on the list of trends on Saturday as the actor celebrated his 45th birthday by announcing the first look of his film Bigil. Of course it is a treat for his fans, who flooded the social media with comments showing their excitement. Vijay shared the poster of Bigil on his twitter profile, in which he can be seen in a double role. The older Vijay sports a menacing look with an 'aruval' at his feet, while the youngster version of the actor is seen behind him tossing a Manchester United football casually. For those who are wondering the meaning of the title, Bigil means whistle in English. Bigil was earlier titled as Thalapathy 63 but more on that later, first look at the film's poster shared by Vijay.

Bigil is being helmed under the banner of AGS Cinema. Archana Kalpathi from the production house even declared it a few days ago that the first-look of the film would be revealed on June 21, and that the second look would come out at 12 a.m. on June 22, on Vijay's birthday. Here's what she tweeted:

Bigil, which will reportedly feature Vijay as a football coach, will reportedly have a supporting cast of Nayantara, Vivek, Kathir, Yogi Babu and Robo Shankar. AR Rahman, who is composing the film's music, also shared his excitement about editing songs for the film. The film is trending on Twitter with different hashtags such as #Bigil and #happybirthdayTHALAPATHYs. Vijay is often referred to as Thalapathy, which means commander, by his fans.

Look who is here I am the first to see ... edit of two songs pic.twitter.com/obUmUvQ94z

Vijay has emerged as a superstar in south. He made his childhood debut at the age of 10 in Vetri in 1984. He then featured as the lead in Naalaiya Theerpu in 1992. Vijay has marked his presence in film industry with movies such as Poove Unakkaga (1996), Thulladha Manamum Thullum (1999) and Thamizhan (2002), which also featured Priyanka Chopra.

Vijay's Bigil is slated to release on October 26 this year.