Shah Rukh Khan And Pooja Bhatt In Such A Cute Pic From 22 Years Ago. Bonus - Kuch Kuch Hota Hai Trivia 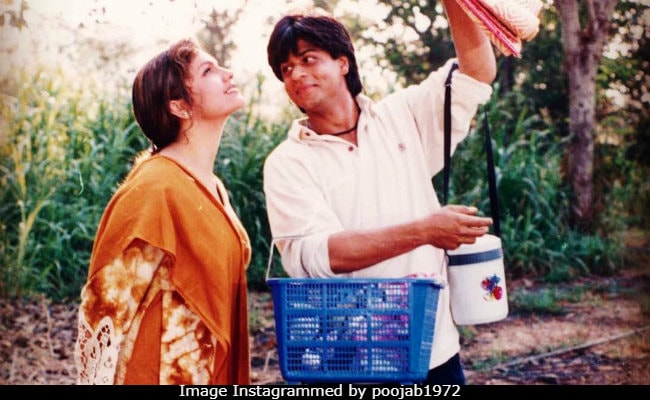 Remember Shah Rukh Khan and Pooja Bhatt's 1996 film Chaahat? Pooja appears to have chanced upon a priceless memory from the film's sets and couldn't resist sharing it with fans because why not? "I'll cover you," Pooja Bhatt captioned the photo, in which Shah Rukh can be seen shielding Pooja from the sun - a scene which originally features in the title song of the movie Chaahat Na Hoti. Pooja Bhatt and Shah Rukh Khan were cast as lovers who eventually get married in the movie only to get their marital bliss disrupted by the evil plan devised by the antagonists, played by Naseeruddin Shah and Ramya Krishnan.

Meanwhile, Karan Johar spotted the photo on Pooja Bhatt's Instagram and had to share interesting trivia about Kuch Kuch Hota Hai, with which he made his debut as a director. It was apparently on the sets of Chaahat in Jaipur that KJo narrated the script of what was to be his debut directorial project. "A film I will always remember! Narrated KKHH to SRK on Chaahat set in Jaipur," he wrote in the comments section. Chaahat released in June 1996, two years after which Shah Rukh, Kajol and Rani Mukerji shared screen space in the classic Bollywood romance.

Here's the title song of Chaahat.

Directed by Mahesh Bhatt, Chaahat remains Pooja Bhatt and Shah Rukh Khan's only movie. However, he featured in a cameo in Pooja Bhatt's 1993 film Pehla Nasha.

On the work front, Shah Rukh Khan is currently looking forward to Anand L Rai's Zero, which releases on December 21. Shah Rukh plays a dwarf and co-stars with Katrina Kaif and Anushka Sharma in the film.