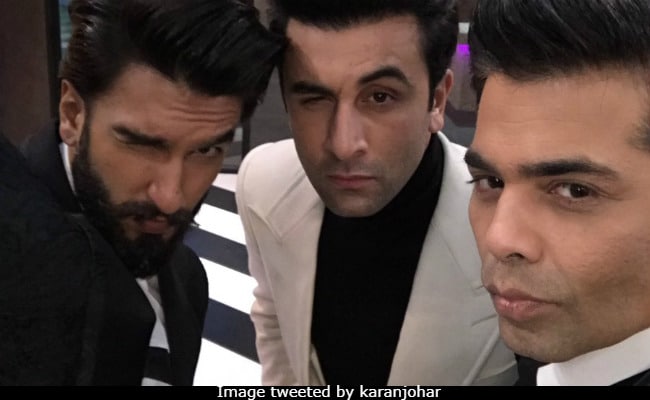 Karan Johar, who has produced over 30 films and directed all-time favourite blockbusters, recently picked a favourite actor in an interview with a magazine, reported news agency IANS. While many may think that he must have mentioned his long-time superstar friend, who starred in his directorial debut, that is not really the case here. "My all-time favourite actor will be Ranbir because he's just phenomenal," ANI quoted Karan Johar telling Man's World India. The 46-year-old filmmaker has directed Ranbir in Ae Dil Hai Mushkil and while Dharma Productions has produced Ranbir's films like Yeh Jawaani Hai Deewani and Wake Up Sid, which won several Filmfare Awards in 2009.

Next up, KJo is also producing Ranbir's upcoming film Brahmastra, which is being directed by Ayan Mukerji. Ranbir co-stars with rumoured girlfriend Alia Bhatt in the three-part epic saga. "I'm excited to have worked with him, I'm excited to work with him for Brahmastra," KJo added.

Karan Johar, who has launched several star kids and introduced new faces in Bollywood, also picked a favourite actress: "I would say Kiara Advani is a girl that I've discovered as an amazing acting resource. I really think that Ishaan Khatter is very talented. I'm really excited to see how Janhvi (Kapoor) and Sara (Ali Khan)'s careers unfold," ANI quoted him as saying.

Kiara Advani was widely appreciated for her role in Lust Stories in the segment directed by KJo. She will also make a special appearance in the Karan Johar produced upcoming movie Kalank, the cast of which was just announced. The cast of Kalank includes Alia Bhatt, Varun Dhawan, Sanjay Dutt, Madhuri Dixit, Sonakshi Sinha and Aditya Roy Kapur. He also recently launched Janhvi with Dhadak while Sara is expected to make her debut with either Kedarnath or Simmba sometime soon.

Karan Johar has a slew of films lined for to be produced by Dharma Productions - Drive, Student Of the Year 2, Simmba Kesari Kalank and Brahmastra. He has also roped in an ensemble cast comprising Anil Kapoor, Kareena Kapoor, Ranveer Singh, Janhvi Kapoor, Bhumi Pednekar and Vicky Kaushal for Takht, which he'll be directing.