"Jim and I are waiting for you to get off your phone," commented Shibani 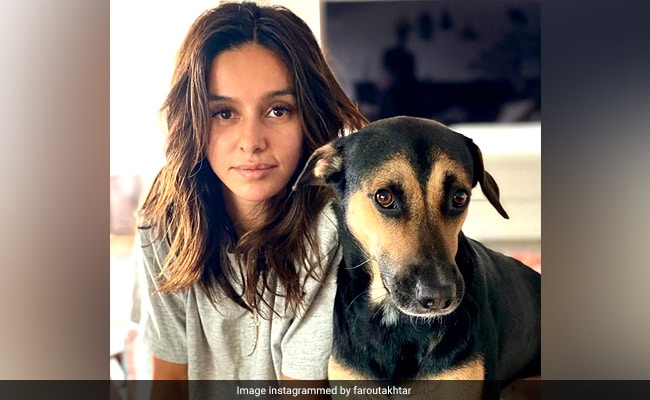 Shibani Dandekar sure knows how to pull boyfriend Farhan Akhtar's leg. The reason we brought this up today is because, on Sunday, the actor shared a really adorable pic of his "Jim" (dog) and "Jam" Shibani Dandekar on Instagram but it was Shibani's comment that left us in splits. Sharing a picture of his girlfriend posing with his dog, Farhan Akhtar wrote: "My Jim and Jam" and accompanied his post with cute hashtags such as #jimstagram and #sundayvibes. However, a couple of minutes later, Shibani Dandekar commented that she is "waiting" for him to "get off his phone." She wrote: "Jim and I are waiting for you to get off your phone" and called Farhan "scrabble addict" in her comment.

And, here's what Shibani Dandekar commented:

Farhan Akhtar, who was previously married to celebrity hairstylist Adhuna Bhabani, and Shibani Dandekar have been dating for over a year now. The couple, who made their relationship Instagram official last year, have made appearances together on several occasions. They also share loved-up posts for each other on their respective social media profile. On Diwali this year, he posted a cute photograph of himself and Shibani dressed in traditional outfits and wrote: "Happy Diwali to you and your loved ones."

Happy Children's Day @chatdelalune @akiraakhtar .. always remain the awesome twosome that you are. Love you.

On the work front, Farhan Akhtar was last seen in Sonali Bose's The Sky Is Pink, in which he co-starred with Priyanka Chopra. Shibani Dandekar, on the other hand, is a model-turned-VJ, who has also participated in reality shows such as Khatron Ke Khiladi and Jhalak Dikhla Ja.