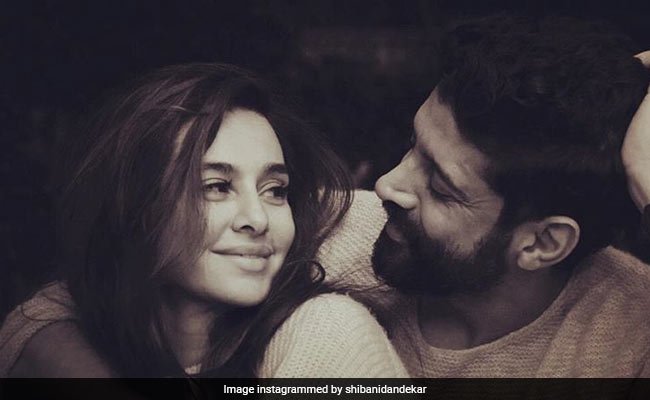 Shibani and Farhan are so cute together (courtesy shibanidandekar)

Would you date to attend a fashion gala in an oversized blazer and dramatic boots? Shibani Dandekar would and she did. While the Vogue Beauty Awards red carpet was busy witnessing floor-sweeping gowns make dramatic entries, Shibani Dandekar walked in in an pale pink blazer worn as a dress styled with a pair of dramatic boots by Azima Toppo and some chunky statement jewellery. Shibani Dandekar, who Instagrammed her red carpet pictures a day after the Vogue Beauty Awards were wrapped but that doesn't mean her feed wasn't showered with messages wowing her look. Needless to say that Farhan Akhtar was one of the first ones to review her red carpet look and a very smitten Farhan did that with one single comment - the heart emoji.

When at the Vogue Beauty awards, Shibani Dandekar caught up with her BFFs. "My six minute bros. If you know you know," she captioned a photo with Monica Dogra and Rhea Chakraborty.

Though we missed Farhan Akhtar with Shibani Dandekar at the Vogue Beauty Awards on Wednesday night, the couple have turned heads on several red carpets and even fashion shows. At the Lakme Fashion Week earlier, Farhan and Shibani walked the ramp hand-in-hand for designer Payal Singhal.

Celebrating 20 years of @payalsinghal ...so incredibly proud of her journey and so blessed to be a small part of it! Have watched her create MAGIC over the last 2 decades and to walk for her with this special man @faroutakhtar was a surreal moment Congratulations my P xx makeup by @anishaachhabriamakeup hair by @reenadutta123 @azima_toppo style assist by @khyatibusa team management @nehalikotian @mariabanat

Shibani had also accompanied Farhan to the screening of his upcoming film The Sky Is Pink at the Toronto International Film Festival.

#SKYISPINK - Was lucky enough to witness the magic of this film as it premiered at Toronto Film Festival and was blown away by how beautifully powerful it is in so many ways! @shonalibose_ you are a star .. she has managed to weave humour and heartbreak through the story with perfection! I was oscillating from laughter to tears with such speed and intensity that I felt pretty exhausted yet so fulfilled!! haha! I couldn't be prouder of @faroutakhtar and @priyankachopra for their incredible portrayal of Niren and Aditi! Their chemistry on screen is just magical! They hit all the right notes in every single frame! both just so DAMN good!! @zairawasim_ and @rohitsaraf10 were beyond brilliant as Aisha and Ishaan and just easy to watch and love - this entire family took you on a journey and just made your heart melt! Killer writing by Nilesh Maniyar!! Please don't miss out on watching this lovely film on October 11th! It is perfection! Congratulations to the entire team @roykapurfilms #ronniescrewvala @purplepebblepictures ps don't miss the insane track by Ishaan Chaudhary @memba.music PS DO NOT MISS me photo bombing the cast and crew picture dress by @rasario styled by @shivsawhney @khyatibusa Shonali's earrings by @hanut101

Also starring Priyanka Chopra, Zaira Wasim and Rohan Saraf, The Sky Is Pink, directed by Shonali Bose, is slated to hit screens on October 11 this year.