"Basically my dad had a new video camera and I was the subject he was constantly shooting," Shibani captioned the post 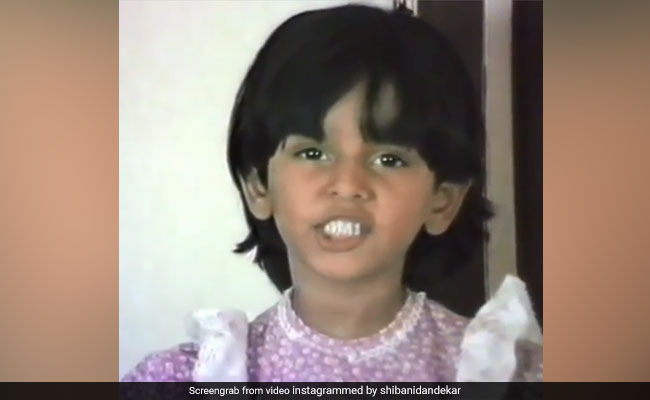 Shibani Dandekar in a still from the video. (Image courtesy: shibanidandekar)

Shibani Dandekar posted a throwback video on her Instagram profile on Saturday and it would be fair to say that her boyfriend Farhan Akhtar put everything into perspective, when he described it as "too much cuteness." In the oh-so-adorable video, little Shibani can be seen singing the songs - Jaane Kahan Mera Jigar Gaya Ji and Satte Pe Satta. Seems like Shibani was always a pro at facing the camera. The VJ captioned the video: "Repping since 1983, busting out the best in Bollywood. Brace yourselves! Basically my dad had a new video camera and I was the subject he was constantly shooting. This was the result. Please note that Hindi is on point."

Farhan Akhtar, who is said to be dating Shibani Dandekar, commented her post: "Too much cuteness" and we couldn't have agreed more. Take a look at the video, you can thank us later:

Repping since 1983 busting out the best in Bolly!! brace yourselves!! Basically my dad had a new video camera and I was the subject he was constantly shooting! This was the result! ps please note that hindi is on point bruv!! styling by @sulabha.dandekar

Shibani Dandekar and Farhan Akhtar reportedly started dating last year. They made their relationship Instagram official of sort last year and are frequently seen making appearances on each other's Instagram profiles. On Friday, Farhan posted a video of Shibani walking the ramp at the Lakme Fashion Week and he captioned it: "You're the one that I want."

Social media PDA aside, Shibani and Farhan are frequently spotted together at events. The couple recently walked the ramp together for designer Payal Singhal at the Lakme Fashion Week.

Farhan Akhtar was earlier married to celebrity hairstylist Adhuna Bhabani, with whom he has two daughters - Shakya and Akira.