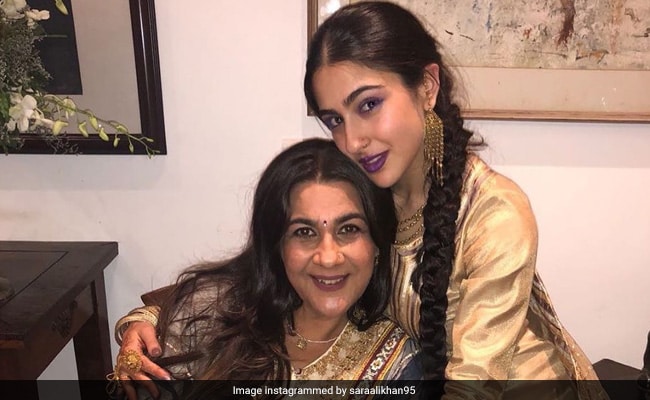 Wednesdays can be dull but we have something which will make your day slightly better. For those who are wondering what we are talking about, we are referring to Sara Ali Khan's latest Instagram entry, which perfectly complements the theme of "Woman crush Wednesday." On Wednesday, the 24-year-old actress posted an absolutely stunning photograph of herself along with her mother Amrita Singh. In the photograph, the mother-daughter duo can be seen dressed in colour-coordinated gold outfits and they look gorgeous. Extra points for Sara's hairstyle - The Simmba actress can be seen sporting a parandi with golden tassels. Sara did not reveal when or where the picture was taken but it appears to be from Diwali festivities.

Sara's caption on the post was as good as the image that she posted. The caption on her post read: "Woman crush Wednesday. My whole life every day." She added the hashtags #likemotherlikedaughter, #mommysgirl and #gotitfrommymama. Sara's post received over 2 lakh likes on Instagram within a few minutes.

Take a look at the lovely picture here:

Amrita Singh frequently makes appearances on her daughter's Instagram profile and we simply love it when that happens. Sara gave her fans a sneak peek into her Diwali celebrations with her brother Ibrahim Ali Khan and their mother Amrirta. The mother-daughter duo picked red outfits for the festival. Sara captioned it: "Diwali hai. Lots and lots of love, luck and laughter from my two safer, eco-friendlier but equally loud pataakhas."

On the work front, Sara Ali Khan will next be seen In David Dhawan's Coolie No 1 remake, co-starring Varun Dhawan. She also has the remake of Love Aaj Kal in the pipeline. The film will be directed by Imtiaz Ali and it will feature Kartik Aaryan and Randeep Hooda.