"The only thing that we can always agree on is Singh Is King," wrote Sara 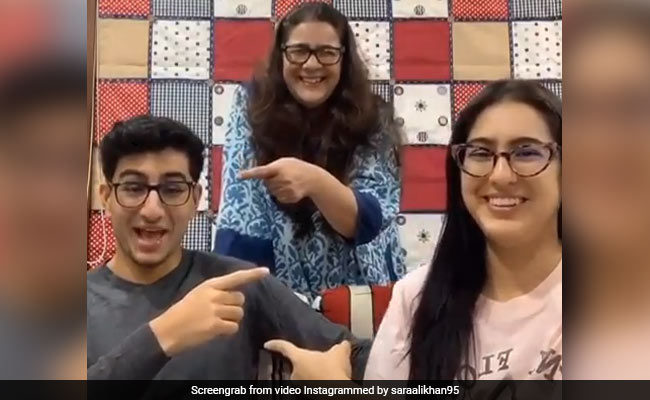 Sara, Ibrahim and Amrita Singh in a still from the clip.(Image courtesy: saraalikhan95)

Who do you think is most likely to get arrested, Sara Ali Khanor her brother Ibrahim? Their actress mom Amrita Singh thinks her daughter is most likely to go to jail but Sara believes something else. The actress, on Friday, took the trending TikTok challenge - Who Is More Likely To - and sent the Internet into a tizzy by sharing a goofy video, in which she can be seen answering some interesting and hilarious questions asked by the app with Ibrahim and mom Amrita. In the clip, answering the question 'Who's most likely to get arrested?' Sara and her mom pointed towards each other while Ibrahim picked himself. When asked 'Who got the most whooping while growing up?' and 'Who is the craziest?' all of them pointed out at Sara. They also agreed that it was Sara who got good grades in school.

Sharing the video, Sara hilariously referred to their difference of opinion with each other and wrote: "The only thing that we can always agree on is Singh Is King." The video was originally shared by Ibrahim on his TikTok account.

Sara Ali Khan and Ibrahim always crack their fans up by sharing ROFL videos. Remember the video that Sara shared a couple of days ago, in which the actress and her brother could be seen telling "knock-knock" jokes? If not, take a look here:

On the work front, Sara Ali Khan made her Bollywood debut with Abhishek Kapoor's Kedarnath in 2018. She has since then appeared in two films - Simmba and Love Aaj Kal. She has Coolie No 1 and Atrangi Re in the pipeline. She will feature alongside Varun Dhawan in Coolie No 1 while Akshay Kumar and Dhanush will share screen space with her in Atrangi Re.