Sanju poster: Ranbir Kapoor and Vicky Kaushal can be seen chilling in a club 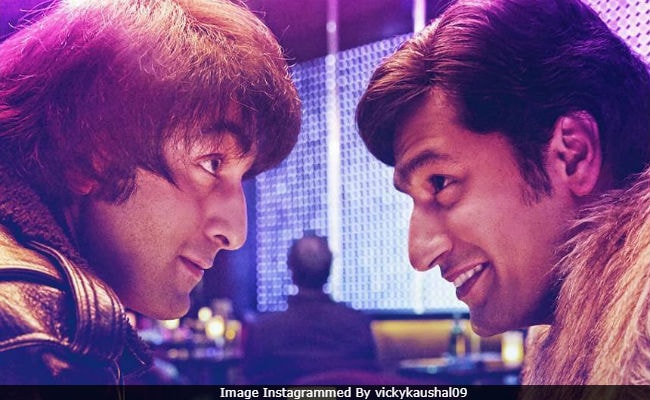 New Delhi: Sanju's latest poster features Ranbir Kapoor and Vicky Kaushal, who plays the actor's best friend in the film. The poster was shared by Vicky Kaushal and shows the two friends chilling in what appears to be a club. It will make you travel to the retro era. "Super excited to be playing the role of Sanju's best friend. Friendships like these are hard to find," he wrote. Earlier, it was reported that Vicky Kaushal will play the role of Kumar Gaurav in Sanju. However, at the launch of Sanju teaser, director Rajkumar Hirani said Vicky plays the actor's childhood friend. Actor Kumar Gaurav is married to Sanjay Dutt's sister Namrata.

Super excited to be playing the role of #Sanju's best friend. Friendships like these are hard to find. The #SanjuTrailer is out in 2 days, on 30th May! #RanbirKapoor @RajkumarHirani #RajkumarHiraniFilms @VVCFilms @foxstarhindi

Sanju is a film on actor Sanjay Dutt's life. Of being a part of Sanju, Vicky Kaushal earlier told PTI that it is a 'big thing' for him. "Sanju is a special film made on a special person and it is made by a special person too. So it is a big thing for me to be part of this film," he said.

The makers of Sanju had releases several posters of Ranbir from the film and last week, the audience were introduced to his co-stars Sonam Kapoor and Paresh Rawal.

The trailer of Sanju arrives on May 30 while the film hits the screens on June 29.