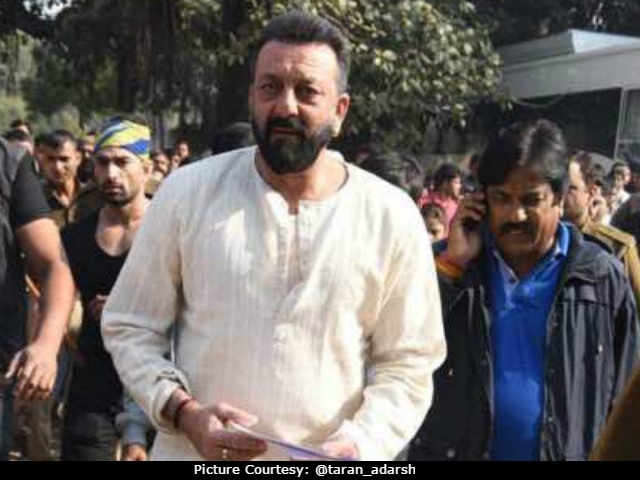 Sanjay Dutt photographed on the sets of Bhoomi (Courtesy: @taran_adarsh)

New Delhi: Actor Sanjay Dutt has been injured while filming Bhoomi in Chambal. Mr Dutt, 57, was shooting an action scene when he was injured. An x-ray at a local hospital reportedly revealed a hairline rib fracture. Producer Sandeep Singh said: "We were shooting the climax scene in the Chambal ravines and Sanjay was in an action sequence when he hurt himself in the rib cage. He must have been in a lot of pain, but he did not stop. Later when we went to the doctor, the x-ray showed a hairline fracture. We wanted to stop the shoot, but Baba insisted. Really commendable on his part." Sanjay Dutt has been put on medication and advised rest but he insists on continuing with shoot.

Producer Bhushan Kumar added:"We really appreciate that Sanjay has been shooting non-stop despite the excruciating pain that he must be in. He is truly a phenomenal person and actor."

Bhoomi, directed by Omung Kumar, is Sanjay Dutt's first film after he completed his five-year jail term in February 2016. Some weeks ago, Sanjay Dutt's bodyguards were involved in a scuffle with the media while the film was shooting in Agra. In a statement, Mr Dutt said, "I was not there on the sets when the incident took place. My pack-up was done long time back. Had I been there, the incident wouldn't have taken place...Had I been there, I would have sorted the issue with love and my 'jaadu ki jhappi,'" reported news agency IANS.

Filming in Agra was stalled previously after the crowd that had gathered to watch became unruly.

Promoted
Listen to the latest songs, only on JioSaavn.com
Bhoomi tells the story of a father and a daughter, who is played by actress Aditi Rao Hydari. The film is scheduled to release on August 4.

Sanjay Dutt, star of films such as Khalnayak and Vaastav, is also the subject of a biopic, directed by Rajkumar Hirani with whom he made the Munna Bhai films. Actor Ranbir Kapoor stars as Mr Dutt. Sanjay Dutt's last screen appearance was in Mr Hirani's PK, which released in 2014 while the actor was in prison.