"So beautiful and such an honest performance," wrote Samantha Kriti Sanon's Mimi, which released on Monday, got a big shout out from Samantha Ruth Prabhu. The star shared a screenshot from the film on her Instagram story on Tuesday night and she wrote: "Absolutely loved Mimi... Kriti Sanon, you were absolutely fantastic. So beautiful and such an honest performance and Pankaj Tripathi Sir ... Congratulations to the entire team." The film, also starring Pankaj Tripathi, Supriya Pathak, Sai Tamhankar and Manoj Pahwa, has been directed by Laxman Utekar and it has been produced by Dinesh Vijan. AR Rahman has composed the music for the film. The film showcases the story of a surrogate mother named Mimi and her journey of embracing motherhood. 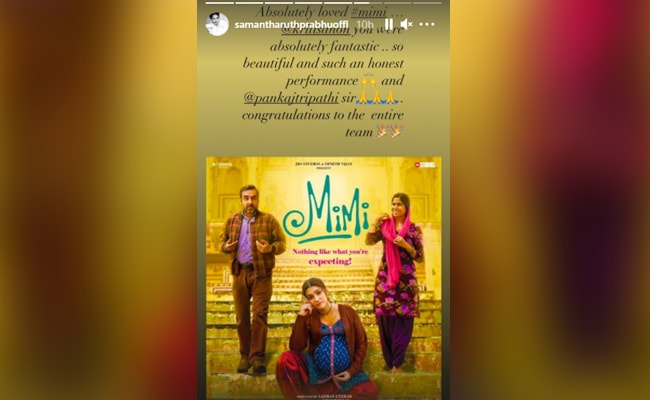 Mimi opened to mixed reviews from film critics. Film critic Saibal Chatterjee, in his review for NDTV, wrote this about Kriti's performance: "Lead actress Kriti Sanon gives a solid account of herself in the pivotal role, skillfully traversing a wide gamut of emotions."

Earlier, Kriti Sanon, who plays the role of a surrogate mother in Mimi, shared a video on her Instagram profile, in which she shared her journey of becoming Mimi. "Gaining those kilosss," she captioned the video. She wrote, "Being blessed with a good metabolism and normally eating burgers and pizzas in life, gaining 15kgs was a challenge... I never thought I could do it, and there was a point when I didn't wanna see food but when I saw how it translated on screen, it was all worth it."