Mimi Review: Notwithstanding the stray parts that are likeable and a cast of actors who rise above the limitations of the script, this remake of the 2011 Marathi film Mala Aai Vhhaychy is strictly average fare. 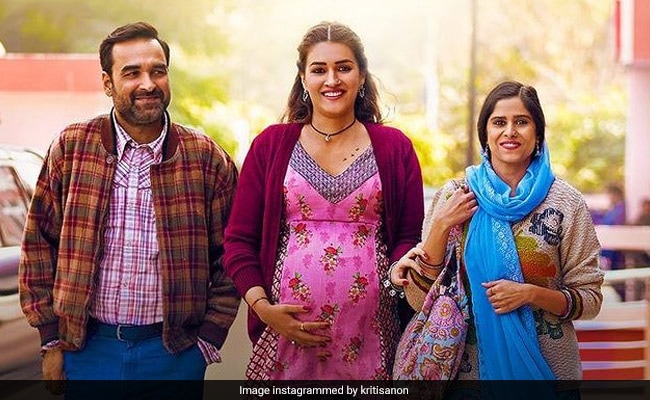 Cinematographer Laxman Utekar's third directorial venture, Mimi is a strange beast in more ways than one. It starts off in the manner of a lighthearted drama about surrogacy and ends on an emotional note that borders on the mawkishly preachy.

As a means to enhancing the social relevance of the story, the film appends a message to its fag-end but no mention can be made of what it is because that would be a spoiler. By the time Mimi runs its course - the film is never particularly pregnant with possibilities once it has played its womb-for-hire trump card - it manages to tell us that one need not give birth to be a parent.

Notwithstanding the stray parts that are likable and a cast of actors who rise above the limitations of the script, this remake of the 2011 National Award-winning Marathi film Mala Aai Vhhaychy is strictly average fare. Its ambitions outstrip its resources by a fair distance.

Mimi, jointly written by the director and Rohan Shankar and based on Samruddhi Porey's original story, tells a female-centric tale but falls into a self-defeating loop by treating the eponymous heroine as a baby-delivery tool who must then also conduct herself as a diligent, selfless mother to a child that isn't her own and showcase womanhood in all its 'glory'.

Barring the protagonist, the characters in Mimi are underwritten and deprived of the psychological underpinnings that would have served to convincingly explain their decisions and actions. The heroine has a friend who stands by her through thick and thin but does not ever acquire a self-sustaining dimension although the audience is allowed a peep into her eventful past.

Lead actress Kriti Sanon gives a solid account of herself in the pivotal role, skillfully traversing a wide gamut of emotions, but owing to the emphasis of the film on the centrality of motherhood in a woman's life, the character does not come across as a full-blown rebel in a back-of-beyond town where every action plays out under prying, questioning and inquisitive eyes.

If anything, despite her daring decision to go through with the pregnancy even when serious complications arise, Mimi conforms to the conservative wisdom that the best thing that she can be is a mother even if that role pits her against her parents and deflects her from her personal aspirations. On one level, the film may be seen as a critique of commercial surrogacy and its consequences, but the ungrudging manner in which an orthodox society takes Mimi's moves in its stride strains credibility. Mimi, streaming on Netflix, is set in a small-town in Rajasthan's Sekhawati region where a much-in-demand dancer (Kriti Sanon) agrees to rent out her womb to a childless American couple for a sum of money that she hopes will fund her dream of moving to Mumbai and becoming a Bollywood actress.

A cheerful Delhi cabbie Bhanu (Pankaj Tripathi), who drives Summer (Evelyn Edwards) and John (Aidan Whytock) to Rajasthan as the married duo look for a surrogate mother who can deliver a healthy baby, becomes the go-between in the deal. Mimi's singer-friend Shama (Sai Tamhankar), a maulvi's daughter who has shaken off an abusive husband, is supportive of her.

It does, however, take some coaxing - Mimi's first impulse is to slap Bhanu for making the preposterous suggestion that she be a surrogate mother - for the heroine to come on board. Money sways her mind. To drive that in, the film falls back on a Mehmood number from an era gone by, Na Biwi na bachcha na baap bada na maiyaa/The whole thing is that ke bhaiyaa sabse bada rupaiyaa.

Sure enough, the prospect of making Rs 20 lakh in lieu of her womb convinces Mimi that the risk of bearing someone else's child is worth a shot. It isn't a cakewalk, though. The 25-year-old woman has to hide the truth from her parents - music guru Maansingh Rathore (Manoj Pahwa) and Shobha (Supriya Pathak). The plan is fraught with pitfalls but Mimi, Bhanu and Shama have no option but to go all out.

Mimi touches upon a bunch of themes - the emotional wages of surrogacy, gender prejudice, religious bias and complexion discrimination. With the exception of the first, which constitutes the core of the story, the others are cavalierly glossed over, even allowed to pass without being shown up.

All the four characters around Mimi - her parents, Bhanu and Shama - exist within a limited bandwidth. You want to know much more about the music tutor than the film is willing to let on. His emotions fluctuate wildly, as do those of his wife. They take next to no time to swing from alarm and distress to resignation and active participation in their daughter's project - their flexibility is admirable but hard to digest.

Bhanupratap Pandey, on his part, has a family - his mother and his wife, another childless woman - but he becomes a permanent fixture in Mimi's home. Why a professional taxi driver forever on the road should become so invested in the fate of Mimi and the child isn't sufficiently contextualized.

It is another matter that the three actors playing these roles - Manoj Pahwa, Supriya Pathak and Pankaj Tripathi - are screen performers par excellence. They breathe life into the sketchily etched characters but are inevitably hamstrung by the inchoate nature of their roles.

Similarly constrained is Sai Tamhankar, playing a woman who has taken the rough with the smooth without letting anything unsettle her. The character has an enigmatic quality that needed far greater substantiation. Details of her past, crucial to understanding who she is, is only sparingly divulged.

The American couple are the worst off among the key characters. Not only are their words and gestures trapped in a swamp of conflicting impulses, they are also reduced to being figures who do not evolve beyond exasperatingly shallow notes. The two actors, saddled with lines that are as cheesy as they come, do not help matters by letting the yawning gaps in character development get the better of them.

Before Mimi, there were two Hindi films about surrogacy - Lekh Tandon's Doosri Dulhan (1983), which had Victor Banerjee and Sharmila Tagore as a childless couple who hire a prostitute played by Shabana Azmi as a surrogate mother (it spawned the copycat Chori Chori Chupke Chupke in 2001), and Meghna Gulzar's Filhaal (2002), with Tabu and Sushmita Sen as friends dealing with a complex web of emotions as one bears the other's baby. Those were infinitely better films although neither worked at the box office.

If parts of Mimi are watchable, it is solely because of the actors. Kriti Sanon delivers a healthy performance, but the film isn't a bundle of joy.