"We are now wrapping up the end shoots of SOS Kolkata which will be released on big screen," said Nusrat Jahan 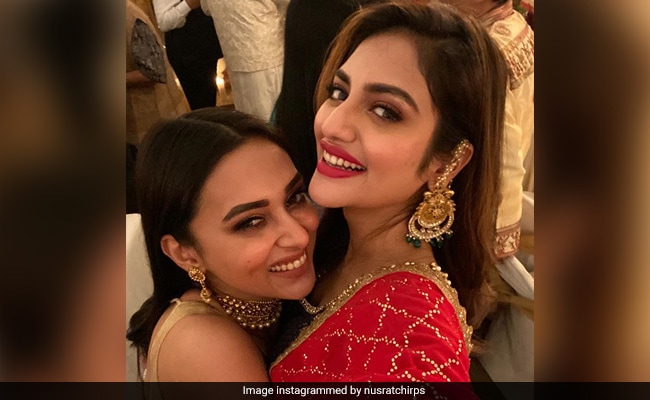 Actor turned MPs Nusrat Jahan and Mimi Chakraborty are sharing screen space in Bengali film SOS Kolkata, shooting for which has started after the West Bengal government allowed resumption of film shoot in the state, reported news agency PTI. Nusrat Jahan and Mimi Chakraborty said they are happy to be back on shooting floors in SOS Kolkata and are enjoying the 'new normal' experience. Nusrat said on Thursday that she is happy that the role of female protagonist came to her, the role which is not usual and conventional for a female lead in a Bengali film, of an out and outsmart, intelligent, gritty character she had always dreamt to play.

"Times are difficult. Hence maintaining all standard protocols were crucial which made us shoot both at day and night hours. We are now wrapping up the end shoots of SOS Kolkata which will be released on big screen," she told reporters during shoots at a five star hotel in the city, reported PTI.

Nusrat Jahan's co-star and friend Chakraborty said: "We are happy that the shoots have passed off so smoothly. I am playing Sanjana, a woman pivotal to the film." Director Anshuman Pratyush said it was a relief to be back on floors after four-month lockdown and "they are abiding by all safety norms stipulated by the government."

He said the film would be released by this Durga puja. The film also cast Yash Dasgupta, Ena Saha, Shantilal Mukherjee, Rupa Bhattacharya and Sabyasachi Chakraborty.

This is Nusrat Jahan's second film after she was elected to the Lok Sabha from the Basirhat seat on a Trinamool Congress ticket. She had been cast in Pavel's Asur earlier. Mimi Chakraborty is the Trinamool Congress MP from the Jadavpur constituency.