The actress will be seen in the role of a pregnant woman in her new film. 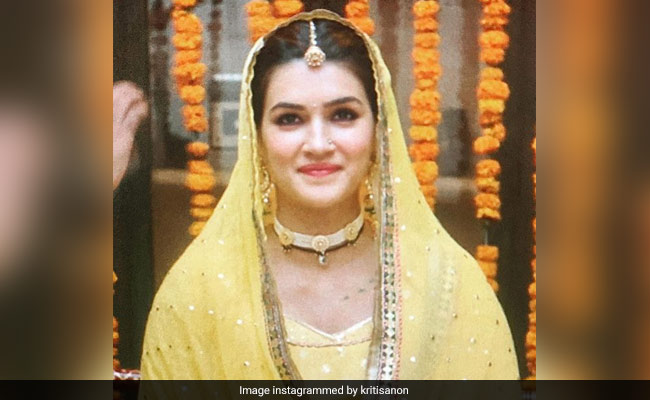 An actor's job is demanding. In addition to tough schedules and gruelling fitness regimes, artists are required to do a fair bit of homework to slip into their character. And this process can range from learning a tricky dialect to transforming one's physique to suit the role in question. With Mimi, actress Kriti Sanon had to say goodbye to her svelte figure and gain a few kilograms as she is essaying the role of a pregnant woman in the film. The transformation almost made her unrecognisable to herself, the actress confessed in her latest Instagram post.

Kriti shared an image from the sets of the film in which she is decked for a baby shower scene. Wearing a traditional outfit in yellow, the actress looks gorgeous as ever. Sharing details, she wrote in the caption, “This was my chubbiest day of Mimi. And it coincidentally happened to be the godh bharai (baby shower) scene. Couldn't recognise myself.” Kriti also added a cheeky hashtag, “chubby Sanon,” to the caption.

Fans and colleagues of the actress left comments describing how lovely she looked. Actress Bhumi Pednekar said, “Very cute.” Interestingly, Bhumi made her Bollywood debut with the film Dum Laga Ke Haisha with a role that required her to gain over 15 kilograms.

Kriti also began her Monday on a “Mimi” note with a behind-the-scenes photo from the film. In it, the actress is seen in a pregnant look, with one hand cradling her “baby bump.” The other hand is near her temple mimicking a gun. She wrote in the caption, “Monday Mimi mood.” She added that the film would release on Netflix on July 30.

Earlier on the occasion of actor Ranveer Singh's birthday, Kriti revealed an interesting trivia about her character in the film and said that she was a Ranveer fan. Sharing a still from the movie where Kriti is staring at a poster of Ranveer, she wrote, “Dear Ranveer Singh, you are Mimi's favourite. And mine too. Wish you a very happy birthday. From Mimi and Me.”

Along with Kriti, the film features Manoj Pahwa, Supriya Pathak and Pankaj Tripathi in pivotal roles. In addition to Mimi, Kriti Sanon's upcoming projects include Hum Do Hamare Do, Bachchan Pandey, Bhediya, Ganpath and Adipurush.