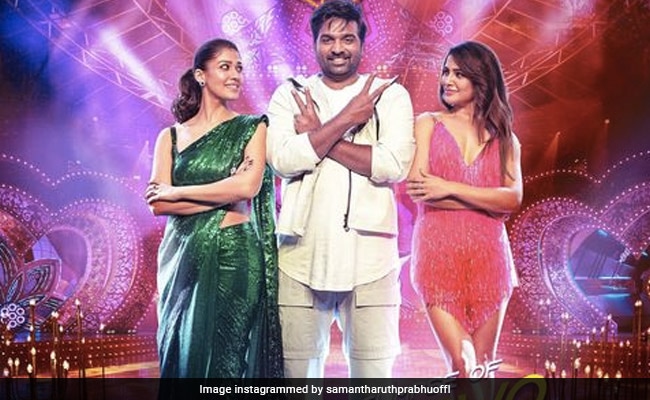 Samantha Ruth Prabhu's upcoming film Kaathuvaakula Rendu Kaadhal has created a lot of buzz on social media. The film, scheduled to release on April 28, also stars Vijay Sethupathi and Nayanthara. And, Samantha is super excited about it. So much so that she has started the week by sharing the news of a song from the film. It's about the track Two Two Two. She has also dropped a poster featuring herself, Vijay Sethupathi and Nayanthara. They all look stunning. The poster read the film's title and added, "Get ready for a glimpse of Two Two Two, The most exciting song of the year, an Anirudh musical." Samantha captioned the post, "See you soon. It's been a while, hasn't it? I have missed you."

Anirudh's Two Two Two was released in September 2021. However, the video included only the music composer and singer.

Last month, Samanta Ruth Prabhu has announced the shoot wrap of the film. The first slide of the post shows Samantha with Vijay Sethupathi and Nayanthara on the sets. The actress also added photos from their wrap-up party and cake-cutting ceremony. She captioned the post, "And it's a wrap. Kaathuvaakula Rendu Kaadhal. Can't wait for you all to laugh till your tummies hurt and then just a little bit more. April 28th it is."

Samantha Ruth Prabhu has been seen with her co-actress Nayanthara during the making of Kaathuvaakula Rendu Kaathal. Samantha posted a photo where Nayanthara is hugging her as they walk down a lit walkway. Samantha's caption read, "20:02. On 22.2.2022. Special. To our special friendship Nayanthara. She's not on social media but she sends you her love." In the hashtags, Samantha also added the film name and the phrase, "Happy twos day."

Samantha Ruth Prabhu has a lineup of films in her kitty. She will next be seen in Shaakuntalam and Yashoda.