Salman Khan, 53 Today, Reveals His New Year Resolution: "Have To Get Six-Pack Abs On Mom's Request" 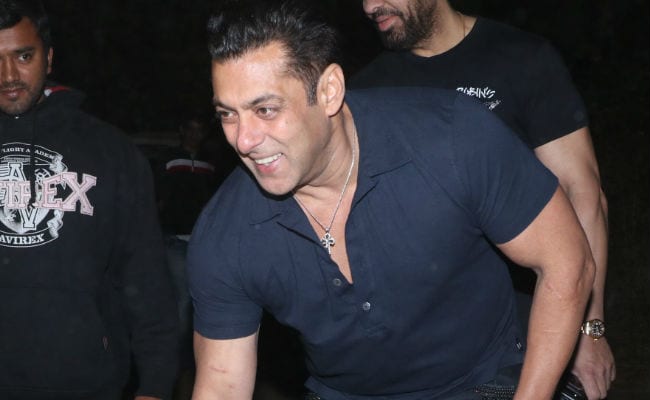 Salman Khan outside his farmhouse in Panvel.

Salman Khan, 53 today, told media persons that his New Year resolution is to workout to make six-pack abs, on his mother Salma Khan's request, reports news agency IANS. Salman Khan was speaking to the reporters outside his Panvel farmhouse on Wednesday, where he celebrated his birthday with his family and friends. "Four days ago, my mother told me that now this four-pack body will not be enough and she asked me, 'What is your resolution for Next Year?' So, I told her, 'Nothing.' Then she told me, 'You have to achieve six-pack body.' So, now that means, I have to be disciplined and I am doing that," Salman Khan was quoted as saying.

"I am going to gym in the morning and evening. I run for one hour and control my food eating habits. She has told me achieve six-pack body which will be simple for me according to her and it is easy for me so, I am going to gift my six-pack body to my mother in the New Year," Salman Khan added.

Salman Khan is currently making Bharat with director Ali Abbas Zafar and co-stars Katrina Kaif, Disha Patni, Tabu and Sunil Grover among others. Salman Khan shared the film's progress report with IANS: "We have shot film in Delhi and other places. Around 30-35 days of shooting is still remaining and it will be completed in film city." Bharat is produced by Salman's brother-in-law Atul Agnihotri and it is a remake of Korean war drama Ode To My Father.

Salman Khan, star of films like Bajrangi Bhaijaan and the Dabangg series, told IANS that he's happy with the "love and respect" he's received from movie-goers. "I feel happy for that reason only. Stardom matters in one way that I have been working from so long but the kind of love and respect people gave me that make me really happy. I am happy that people believe in me and there is nothing more important than trust," Salman Khan said.

Salman Khan's Race 3, which released on Eid this year, fared well at the box office despite being panned by film critics. Salman also launched his brother-in-law Aayush Sharma (married to Arpita Khan) this year with Loeyatri, which did not yield positive results.

Salman Khan, who has launched several aspiring artistes, is also backing the debut project of Mohnish Bahl's daughter Pranutan opposite newcomer Zaheer Iqbal, who is the son of Salman's childhood friend. "Mohnish Bahl is childhood friend of mine and he has worked with me as well (Hum Saath-Saath Hain, Maine Pyar Kiya and Hum Aapke Hain Koun?). Now, I have got the opportunity to launch her daughter. Zaheer's father is also childhood friend of mine. Once he gave me Rs 2,011 as a loan then, it increased up to Rs 11,000. So, I had to repay that loan to him with interest at some point or the other. I felt it's the right time to do that," Salman Khan said.