RRR is Rajamouli's first project after Baahubali 2: The Conclusion 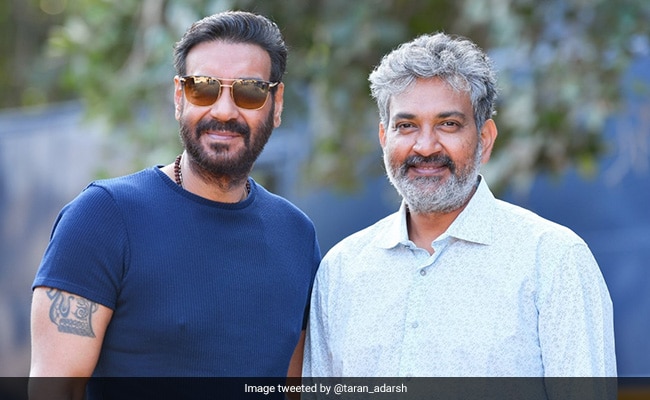 Ajay Devgn has been trending incessantly on Twitter and the reason is that the actor started filming for SS Rajamouli's forthcoming film RRR, which also stars Alia Bhatt, Ram Charan And Jr NTR. On Tuesday, the makers of the film shared a picture of Ajay Devgn along with the film's director SS Rajamouli on Twitter. The duo can be seen happily posing for the camera in the picture. "All of us are super charged and ecstatic to kick-start our schedule with Ajay Devgn ji today... Welcome Sir," read the tweet shared by the official Twitter handle of RRR.

All of us are super charged and ecstatic to kickstart our schedule with @AjayDevgn ji today... Welcome Sir!#AjayDevgn#RRRMovie#RRRpic.twitter.com/9jVnlpdTmY

The film floors in November 2018 in Hyderabad and the launch was also attended by Rajamouli's Baahubali star Prabhas and antagonist Rana Daggubati. The first clap for the film was given by legendary actor Chiranjeevi.

The makers of RRR gave the fans a sneak peek of the film's plot and revealed that the film is set in the 1920's and it is a "fictitious story based on two legendary freedom fighters - Alluri Seetharamaraju and Komaram Bheem."

The Story Line of #RRR ! #RRRPressMeet@ssrajamouli@tarak9999#RamCharan@dvvmovies@RRRMoviepic.twitter.com/GqRXrMqbEa

RRR is Rajamouli's first project after the blockbuster Baahubali 2: The Conclusion, which was a massive success. The film will release across the globe in Hindi, Tamil, Telugu and Malayalam simultaneously. RRR is expected to release on July 30, 2020.