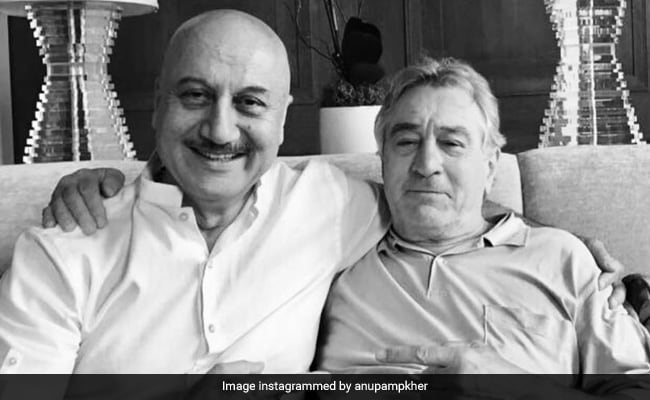 Anupam Kher, in a recent interview with ETimes revealed that his Silver Linings Playbook co-star and Hollywood legend Robert De Niro "frequently" messages him to check up on the Bollywood veteran's wife Kirron Kher, who was diagnosed with multiple myeloma, a type of blood cancer, earlier this year. Anupam Kher told ETimes, "Robert had messaged me when he learned about Kirron's health. He had also sent me a video to wish me on my birthday, and he keeps checking on Kirron's health every few days. I had texted him after seeing his ad with Roger Federer, and in response, all he wanted to know was my family's well-being and how Kirron was doing." For the uninitiated, Robert De Niro made frequent appearances on Anupam Kher's Instagram profile, especially when the Bollywood actor was staying in New York.

Earlier this month, the actor warned against rumours about Kirron Kher's health that were doing the rounds. "She is doing absolutely fine. In fact she got her 2nd vaccination done for COVID this afternoon. I will request people not to spread such negative news. Thanks. Stay safe," an excerpt from Anupam Kher's post read.

In April this year, the actor revealed that his wife is currently undergoing treatment and that she is on her "way to recovery." Anupam Kher  wrote, "Just so that the rumours don't get the better of a situation, Sikandar (their son) and I would like to inform everyone that my wife has been diagnosed with multiple myeloma, a type of blood cancer. She is currently undergoing treatment and I am sure that she will come out of this stronger than before."

Anupam Kher was last seen in the 2019 crime-thriller One Day: Justice Delivered, in which he co-starred with Esha Gupta, Kumud Mishra and Anusmriti Sarkar.