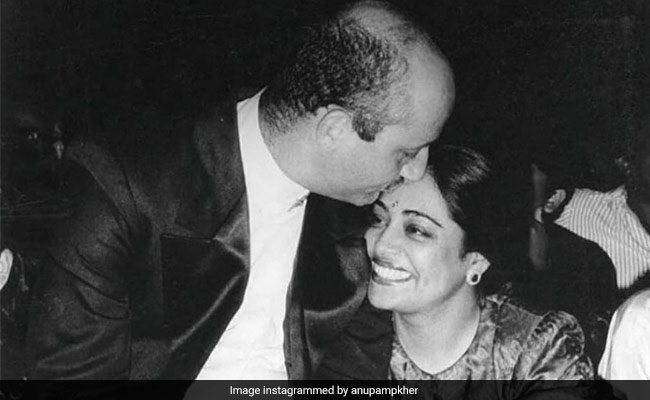 "Kirron Kher is absolutely fine," actor Anupam Kher said about his wife. The news of actor and BJP MP Kirron's death had been reportedly doing rounds on the Internet yesterday. On Friday night, Anupam quashed the rumour about Kirron's death on Instagram. He shared a statement about her health on the platform and captioned his post with folded hands emoji. In his statement, the actor clarified that the "rumour going around about her health is false." Anupam also informed everyone that Kirron recently got her second dose of the COVID-19 vaccine. He also urged people not to spread "negative news" regarding her health.

"She is doing absolutely fine. In fact she got her 2nd vaccination done for COVID this afternoon. I will request people not to spread such negative news. Thanks. Stay safe," an excerpt from Anupam's post read.

Anupam recently got his second dose of the COVID-19 vaccine along with his family. Anupam went to the vaccination centre with his wife Kirron Kher, mom Dulari Kher, brother Raju Kher and sister-in-law Reema Kher. He posted a few glimpses from the vaccination centre on Instagram. In his caption, the Saaransh actor wrote, "We got our 2nd vaccination done. Thank you #SisterAnnie #DrAfsa and Nanavati hospital for making it possible. Mom was the bravest. Chanting #OmNamah Shivay helped me and hopefully Kirron Kher bhabhi Reema Kher and brother Raju Kher also!! #MaskUp #StaySafe #GetVaccinated.

Kirron Kher is battling multiple myeloma, a type of blood cancer. Anupam had shared the news on Instagram on April 1. In his statement, he wrote, "Just so that the rumours don't get the better of a situation, Sikandar (their son) and I would like to inform everyone that my wife has been diagnosed with multiple myeloma, a type of blood cancer. She is currently undergoing treatment and I am sure that she will come out of this stronger than before..."

Later on April 29, Anupam had shared the update about Kirron Kher's health in a live session on Instagram. Anupam informed that she is "improving but the medicines of multiple myeloma have many side effects." In the video, he said, "She is in good spirits and hopefully she will come out of it. With prayers from her well-wishers, everything will be fine."