Ali Fazal and Richa in a still from the video. (courtesy therichachadha)

Richa Chadha's birthday wish for her “best human” Ali Fazal is all things love. The actress, who flew to Delhi with  Ali Fazal on his special day, has also uploaded a video featuring the two. The couple looks adorable here. Now, it's time to read the special message. “You know, that one person with whom you lock eyes and can converse without words even in a room full of people? That. Ali Fazal. Happiest birthday to the best human, I am gonna get back to not using language,” she wrote. The clip was an instant hit on Instagram with fans and friends of the lovely couple dropping their reactions in the comment box. A fan even referred to Ali Fazal's character in the web series Mirzapur for his comment. “Guddu bhaiya with guddi,” it read.

Earlier in the day, Richa Chadha had dropped a snapshot of the two to reveal her plans for Ali Fazal's birthday. “En route to being airborne for bae, on his  special day.” And, the actor reposted the slide on his Instagram Stories and wrote, “Jaldi aao [Come fast].” 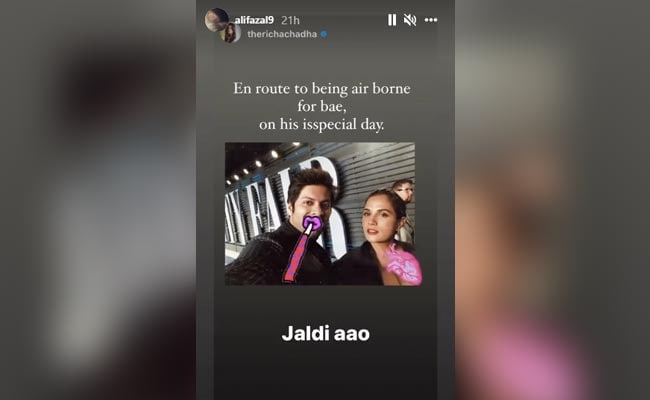 Just to make this a bit more adorable, Ali Fazal shared a frame on Instagram featuring himself and Richa Chadha. Looks like it was clicked on the sets on a project. Well, it is the caption that has our hearts. “Just on good days, I like to be with good people. Richa Chadha, miss you Sinbad Phgura, we meet soon,” the actor wrote.

Ali Fazal will be next seen in Khufiya. The film is directed by Vishal Bhardwaj.

When Gauri Khan And Manish Malhotra Danced At A Monaco Wedding. Watch