"...the celebrations continue," Raveena wrote in her caption 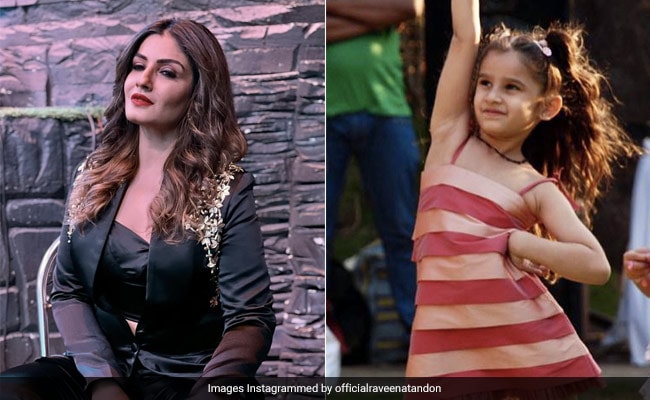 Raveena Tandon's daughter Rasha Thadani, who turned 16 on Tuesday, has always been a "poser". Raveena's birthday-special post for her on Instagram says it all. Raveena posted a few pictures of the birthday girl Rasha on the occasion. The series features a few childhood pictures of Rasha and some photos of her 16th birthday. Rasha looks adorable in her pictures and she can be seen making a cute pout in a few of them. Going by her childhood photos, we agree with Raveena as she calls Rasha a "poser" in the caption.

Raveena also shared another set of pictures on Rasha's sweet 16 on March 16. This series features a photo of her birthday cake and a few pictures of Rasha celebrating the day with her childhood friends. The Mohra actress wrote a beautiful caption along with the pictures that read, "Truly blessed are those who have lifelong friends... who make moments special...from babies to now .. always together..."

Raveena Tandon married film distributor Anil Thadani on February 22, 2004. She started dating him during the making of her movie Stumped in 2003. Raveena and Anil welcomed their daughter Rasha in 2005. Three years later, their son Ranbirvardhan was born in 2008. The actress adopted two girls Pooja and Chhaya as a single mother in 1995.

In terms of work, Raveena Tandon made her debut in Bollywood with Patthar Ke Phool, a film that was released in 1991. She was paired opposite Salman Khan in the 1991 movie. Raveena will now be seen in K.G.F: Chapter 2, in which she will play the role of Ramika Sen, the Prime Minister of India. The upcoming film will release this year.