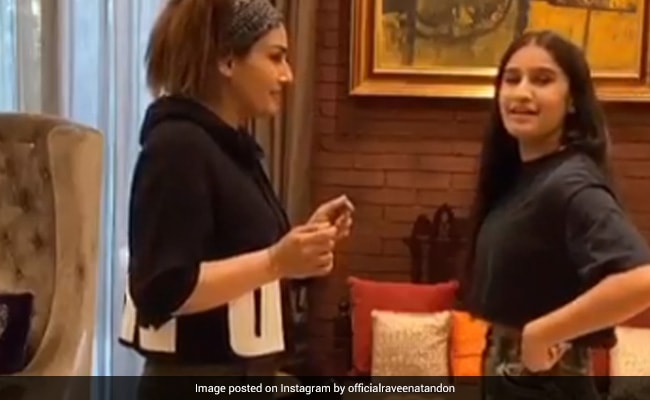 Screenshot of the video shared by Raveena Tandon. (courtesy officialraveenatandon)

Raveena Tandon, who recently "hopped on the trend" with her "Flip the switch" video, seems to be loving the TikTok challenges. The 46-year-old actress roped in daughter Rasha, this time for the "Oh Nanana" challenge that has got folks busy on TikTok. The "Oh Nanana" challenge requires two people to match their steps by touching their feet with each other's, while dancing to the song Oh Nanana by the popular Brazilian artist Bonde R300. On Sunday, Raveena shared a set of videos on her Instagram profile featuring her daughter Rasha. In the first video, the mother-daughter duo took up a challenge where Rasha can be seen matching her lips to the dialogue "it is disrespectful" while Raveena can be seen constantly saying "to you." In the second video, Raveena and Rasha can be seen taking up the "Oh nanana" challenge where they can be seen dancing. Sharing the ROFL videos, Raveena added the hashtags, "#Ohnananachallenge" and "#TikTok" to her post. Take a look:

On Thursday, Raveena took up the "Flip the switch" challenge where the actress and Rasha were seen grooving to Drake's Nonstop. The video began with Rasha grooving to the song in a monochrome top and grey trousers as she held a dog, while Raveena, sporting a black jacket, a pair of trousers and a white cap, held the camera. Soon they "flip the switch" and Raveena was seen dancing in Rasha's outfit holding a cat as Rasha held the camera. Sharing the video on her Instagram profile, Raveena wrote, "This was switch 2. Did you guys notice the most obvious switch."

Raveena, who is currently in home with family due to the nationwide lockdown, shared the first part of her "Flip the switch" video on Wednesday, where the mother-daughter dup took up the challenge, minus the pets. Raveena wrote, "Finally hopped on the trend! Go check out my very first TikTok with Rasha Thadani."