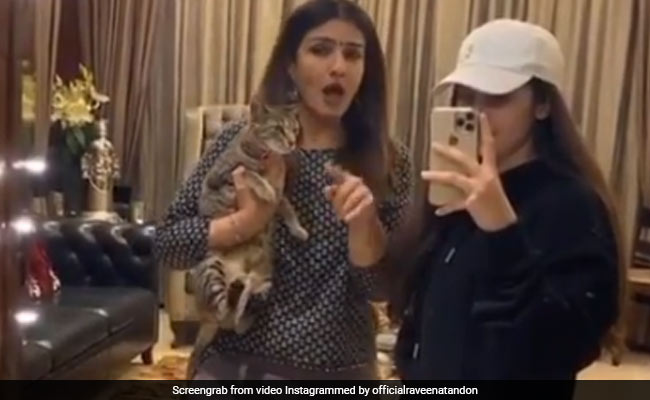 Raveena Tandon seems to have "finally hopped on the trend" as she took up the "Flip the switch" challenge that has been keeping everyone busy on TikTok. The 46-year-old actress roped in her daughter Rasha, 13, for the challenge. The "Flip the switch" challenge requires one person to stand in front of the mirror holding the camera while the other participant dances to Drake's Nonstop. Mid-way through the song, the people in the video switch places and clothes and TikTok makes it look like it all happened in the blink of an eye. The video begins with Rasha grooving to the song in a monochrome top and grey trousers as she holds a dog, while Raveena, sporting a black jacket, a pair of trousers and a white cap, holds the camera. Soon they "flip the switch" and Raveena can be seen dancing in Rasha's outfit holding a cat as Rasha holds the camera. Sharing the video on her Instagram profile, Raveena wrote, "This was switch 2. Did you guys notice the most obvious switch."

Raveena, who is currently in home with family due to the nationwide lockdown, shared the first part of the TikTok video on Wednesday, where the mother-daughter dup took up the challenge, minus the pets. Raveena wrote, "Finally hopped on the trend! Go check out my very first Tik Tok with Rasha Thadani."

Raveena Tandon married film distributor Anil Thadani in 2004. The couple are parents to daughter Rasha and son Ranbir Thadani. The actress also adopted two daughters - Pooja and Chaya in the 1990s when she was a single mother.