Neetu Kapoor wrote, "The richest are the ones with good relationships. We all need love, support strength from our loved ones always." Neetu Kapoor, who turned 62 on Wednesday, shared pictures from her birthday get-together on Instagram accompanied by a small note of appreciation for those who were in attendance. "The richest are the ones with good relationships. We all need love, support strength from our loved ones always. I feel the richest today." Neetu Kapoor's birthday squad included her children Ranbir Kapoor and Riddhima, granddaughter Samara, sister-in-law Rima Jain, niece Nitasha Nanda and Agastya Nanda - grandson of Neetu Kapoor's late sister-in-law Ritu Nanda. Filmmaker Karan Johar and designer Manish Malhotra also joined the Kapoors. In an adorable picture, Ranbir can be seen giving his mother a tight hug.

Here are pictures from the small get-together hosted for Neetu Kapoor on her birthday:

Manish Malhotra shared a picture with Neetu Kapoor on his Instagram page and wrote, "Happy birthday, Neetu Kapoor. Stay this wonderful always... One of my most favourite heroines and I love every movie of yours and all your songs and especially the ones with Rishi ji (late actor Rishi Kapoor) are my all-time favourites #love." Manish Malhotra also shared a picture on his Instagram story, which included Nitasha Nanda and Riddhima. 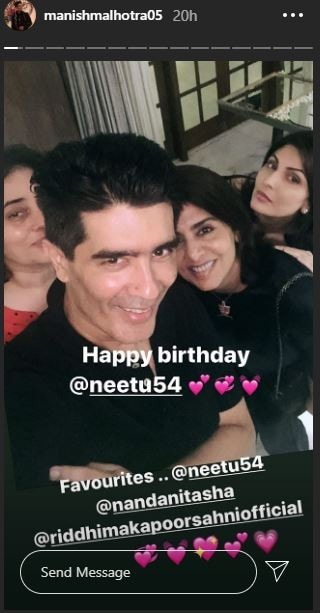 On the eve of Neetu Kapoor's birthday, her daughter Riddhima Kapoor Sahni shared an adorable picture of herself, Neetu Kapoor and Ranbir - the trio squeezed in for the photo - from the same get-together. She wrote, "Happiest birthday, my Iron Lady. I love you so much, Ma."

Neetu Kapoor was married to actor Rishi Kapoor, who died in April this year. Together, Neetu Kapoor and Rishi Kapoor have made movies such as Amar Akbar Anthony, Khel Khel Mein and Rafoo Chakkar, among others.