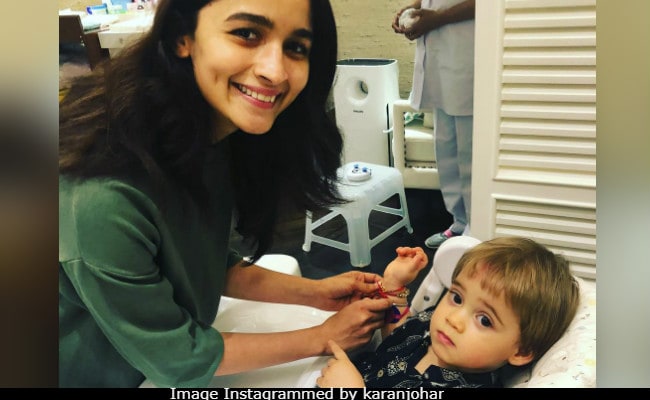 Alia Bhatt may be busy with the shooting of Kalank but she sure has time to celebrate Rakhi, especially when it's with Karan Johar's son Yash. On Sunday, the 25-year-old actress dropped by at Karan Johar's residence to celebrate Rakhi with Yash and Karan shared a glimpse of what went down during the festivities. A photo of Alia and Yash appeared on his Instagram with the caption: "Big sister love! Alia Bhatt and Yash. Happy Raksha Bandhan." On Monday, fans on Alia Bhatt's Instagram also woke up to the same photo with an adorable caption: "My beautiful baby brother!!! Aaaaah just look at that faceeeeee," she wrote. Alia, who was launched in Bollywood by Karan, can be seen smiling ear-to-ear in the photo as she ties a rakhi to little Yash, who appears slightly bewildered with the happenings.

Karan Johar welcomed twins Roohi and Yash via surrogacy in February last year. Alia Bhatt was one of the first ones to have congratulated his mentor when he made the big announcement on social media. Alia was also one of the first visitors to drop by at KJo's residence to meet the twins when they were brought home. Roohi and Yash celebrated their first birthday in February this year, when they received a lovely birthday wish from "big sister" Alia. "May you live to be a 103! Happy birthday my beautiful siblings," she wrote.

May you live to be a 103! Happy birthday my beautiful siblings

In October last year, Alia had also Instagrammed a click from Karan Johar's Diwali party, also featuring Roohi and Yash. Karan Johar launched Alia and along with Varun Dhawan and Sidharth Malhotra in 2012's Student Of The Year, since when they have officially been included in Karan Johar's closest circle of friends.

On the work front, Alia Bhatt is currently busy filming Kalank, which will be co-produced by Karan Johar's Dharma Productions. Alia also has movies like Gully Boy with Ranveer Singh and Brahmastra with Ranbir Kapoor in the pipeline.